In almost no time at all, the electric car has reached, if not the mainstream, then certainly close enough to it.

Instead of technological wizardry and cool gizmos, EVs now have to do everything a regular car can do, from daily driving to extended commutes. No longer just an electric car – rather, a car that happens to be electric. As one of the most affordable and longest-range choices on the market, as well as being offered in what might soon be the nation’s most popular segment, the Hyundai Kona Electric has more pressure on it than most other EVs to let the steak, rather than the sizzle, do the talking.

Approach the Kona Electric from the rear or either side, and you’re not likely to even notice it’s not the gas version. Though from that angle you might spot the badge and lack of tailpipes under the bumper. It’s only at the front where the two Konas differ, with the EV offering the same insect-like upper marker lights, but where the gas Kona has a large open grille, the Kona Electric is closed off. It doesn’t need a radiator, so Hyundai has made it more aerodynamic instead while at the same time giving it a character of its own. It’s the opposite of what Nissan has done with the Leaf or Toyota with the Prius, and while it might not give you the cachet of a spaceship-style electric, it’s also much nicer to blend in every day.

Much the same inside, step in through the tall door opening and it’s a handsome design, but it’s quite conventional. The clean and functional styling is common to all current Hyundais, if not as showy as those it has revealed in the last few months. To driver’s right is a push-button gear selector with the handy and covered wireless phone charger (Ultimate only) in front and twin cup holders to the side. Thanks to not having a conventional gearchange, there’s more room for those cup holders and the center console feels wide, giving the whole cabin a feeling of more space. 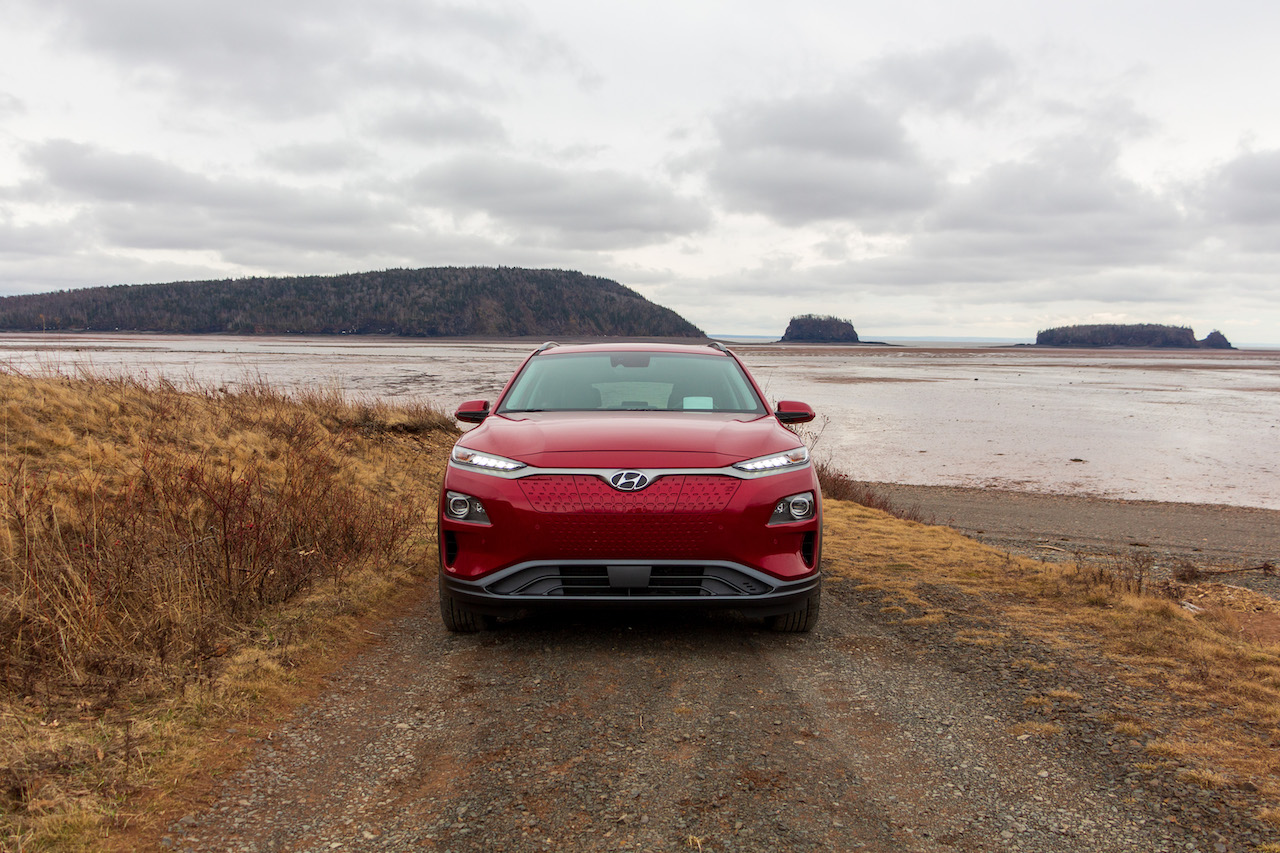 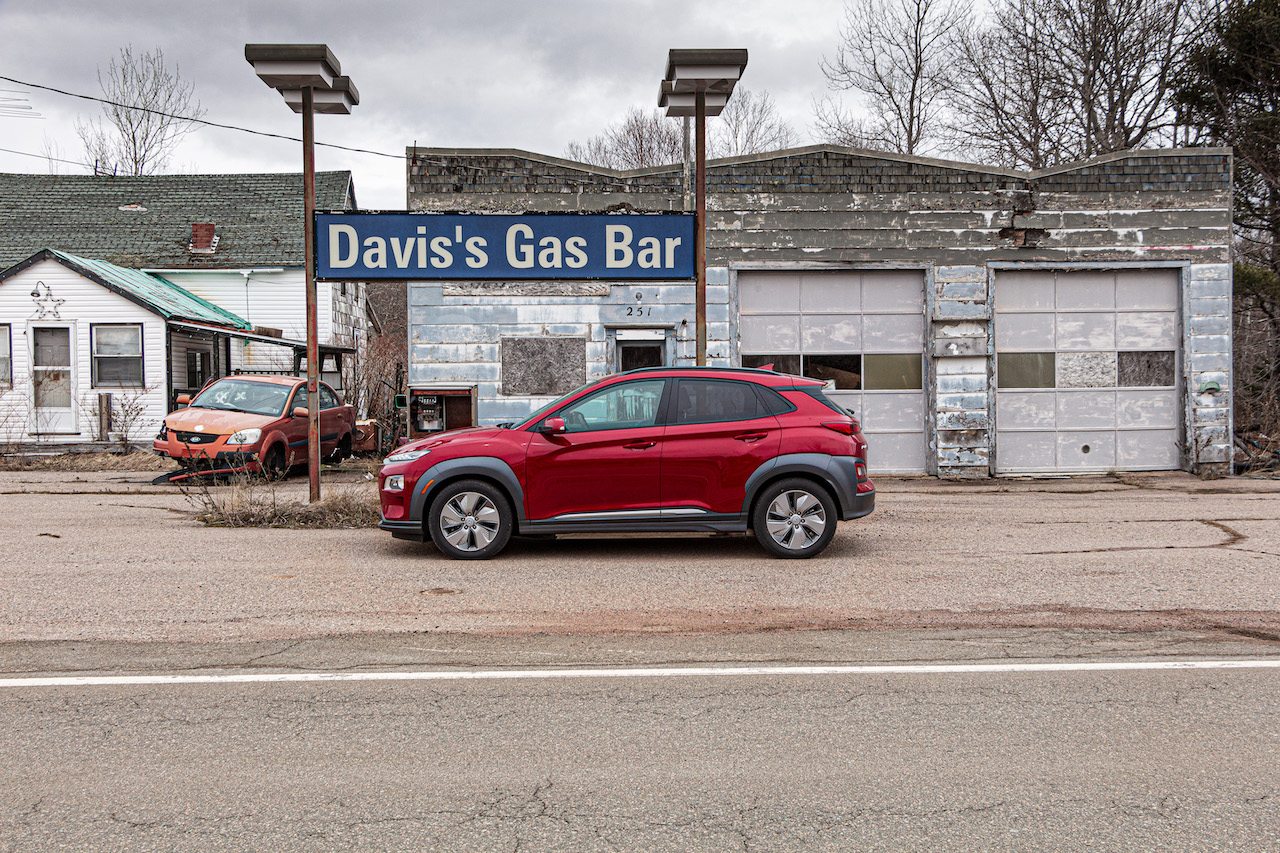 Not that it’s crowded, at least in the front, driver and front passenger should have more than enough room. It’s that the positioning means you’re not crowded by your 2-litre pop and XL-coffee, so it feels even larger. Space in the back is also good, at least for the class, though you won’t be putting six-footers back here for any length of time. Cargo space is, again, good for the class, with an easy-reach load floor height. If you were hoping for the front-trunk that is becoming the signature of the EV, pop the hood here and you’ll be disappointed. All that’s there is electronic equipment that looks at first glance like there’s actually an engine in here.

It doesn’t feel like there’s an engine when you turn it on, though. Push the button and it is, of course, as silent as it was before. My week with the Kona started with snow tires, and while they offered impressive foul-weather traction, they were completely overwhelmed by the immediate torque of the electric motor’s 291 lb-ft (with 201 hp). Rising temperatures and an opening at the local dealer meant a swap to the OE three-season rubber making a huge difference to grip. It also improved efficiency significantly, meaning fewer watts per km of driving and allowing a longer theoretical range.

The 415 km is the official range estimate, though I didn’t see more than 390 indicated after any of my charges. Only once did I let it get low enough to care about the difference and charging at home overnight on a 120V wall outlet offered more than enough juice for my week. The EV fast-charge infrastructure in much of the country is another story, though with this range you’ll likely not need to use those chargers as often as you likely think. Plugging in is quick and easy thanks to the charge port in the nose rather than the usual front or rear fender mounting, and the wall plug offers a handy screen to keep you apprised of what’s going on with the Kona’s charge situation.

On the road, the Kona EV is about 300 kg heavier than gas and you can feel that weight in the ride and in turn-in. It feels more solid going over bumps, but the revised suspension handles it well without floating or floundering. Steering is typical EV numb but weighted enough to not hurt the experience. It’s quiet over bumps and in the wind, though not as silent as I’d like from an EV on summer tires. 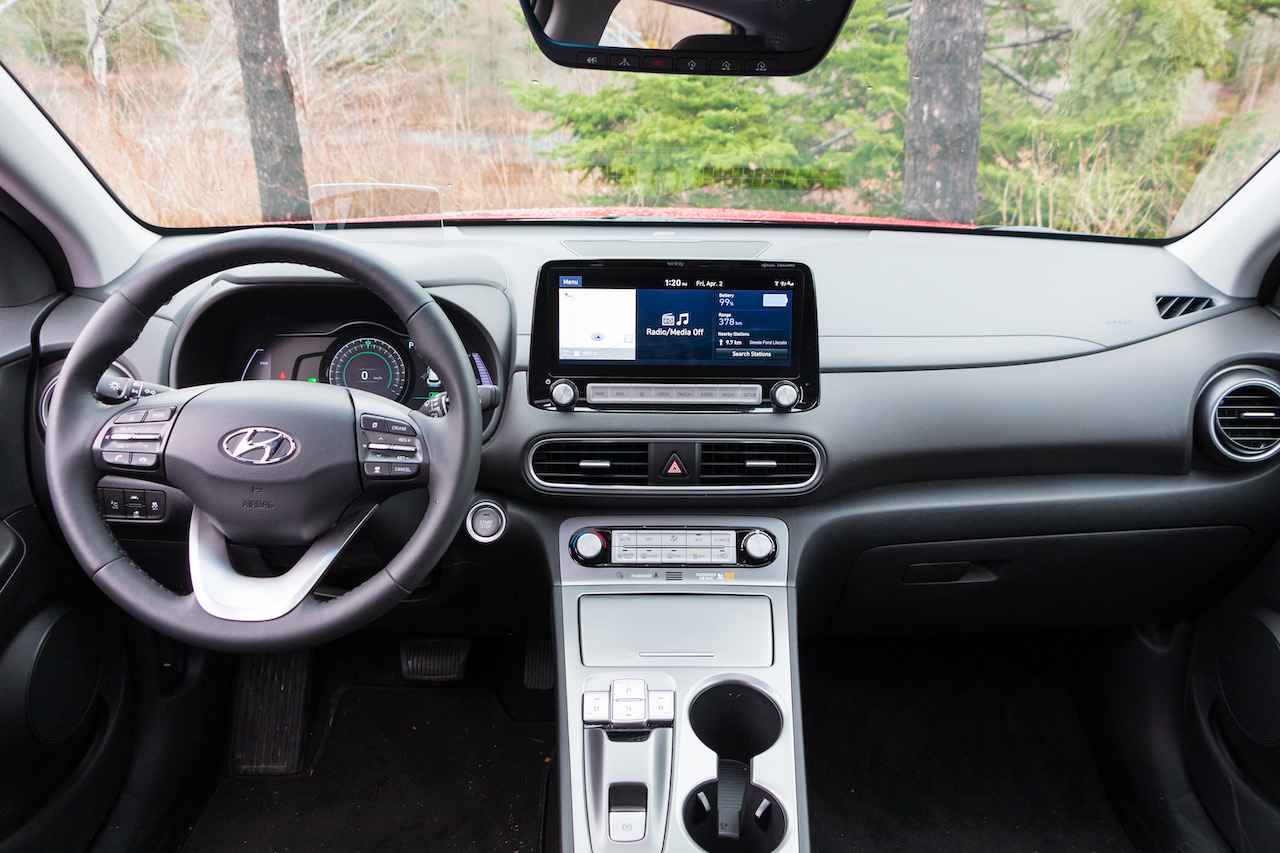 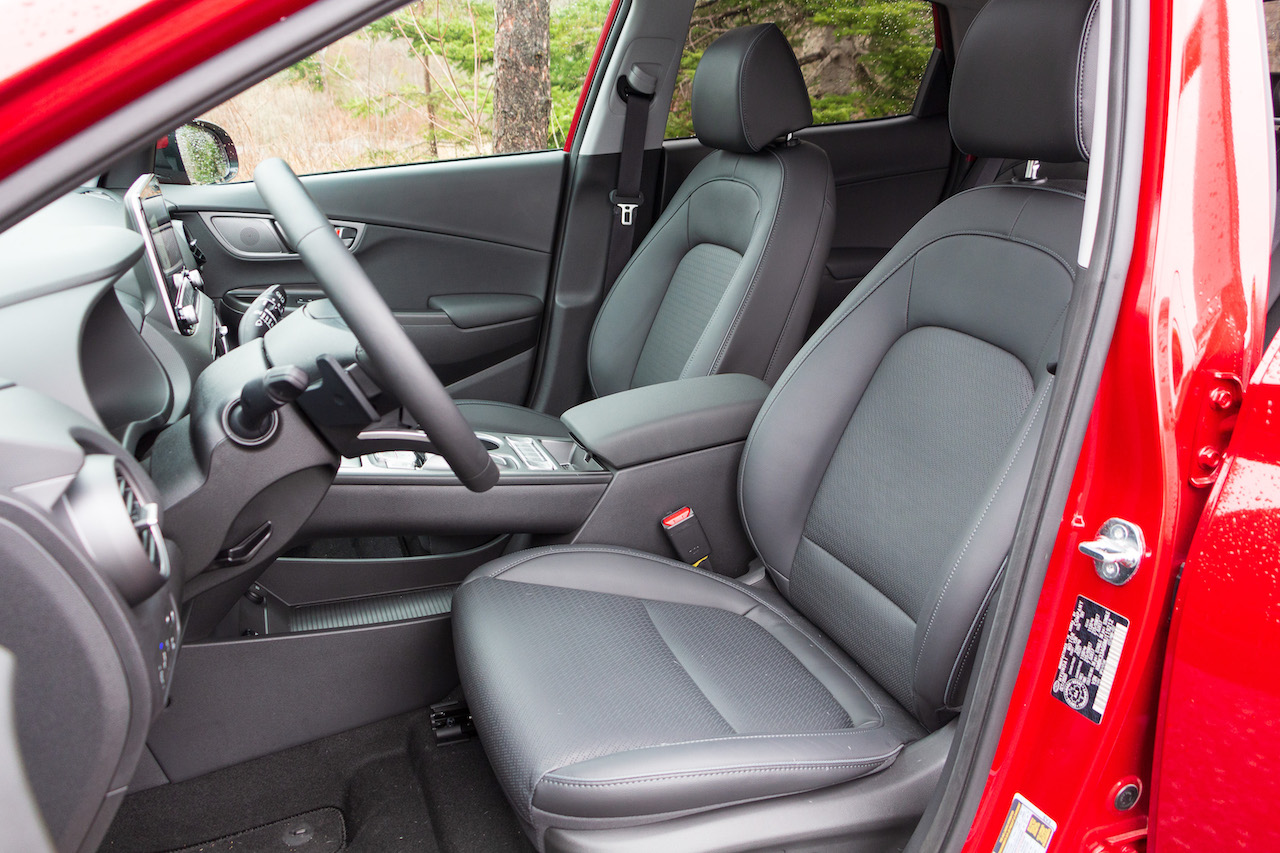 A heated wheel comes with all but base, heated seats the same, with ventilated front chairs on top-spec models. A 7.0-inch touchscreen is standard with an ultrawide 10.25-inch version on Ultimate that adds navigation and EV info display. With Apple CarPlay and Android Auto standard on all, the nav-system isn’t necessary, and the larger system is quick and responsive, allowing three-wide different display views. Hyundai given all Kona Electrics forward collision warning and lane keeping, adding adaptive cruise, pedestrian detection, rear parking and cross-traffic sensors, and blind spot warnings to mid-grade with the top adding high beam assist and front parking sensors.

The Kona Electric was the first electric subcompact crossover to hit the market here, but Hyundai did more than just be first. It’s every bit as good as the gas-powered version and possibly better thanks to the lower operating costs and lack of engine noise. From $44,999 and climbing to $53,149, it qualifies for all of the EV incentives, it has all of the amenities of larger and pricier crossovers, and with one or two small exceptions (like door lock switches) it feels up to the demands of the price tag. Now that Hyundai has increased availability, expect to see loads of this funky EV at a plug near you. 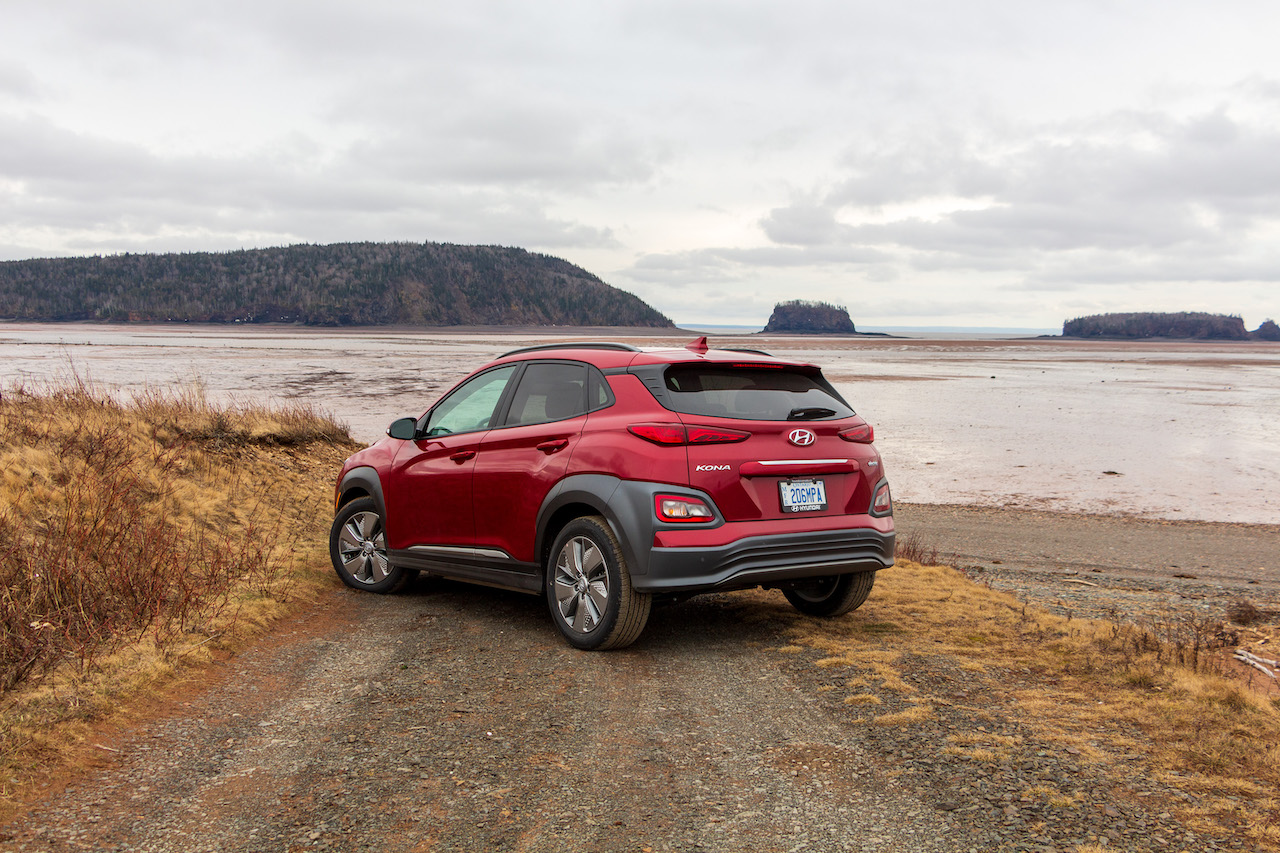 The vehicle was provided to the writer by the automaker. Content and vehicle evaluations were not subject to approval.