(TORONTO) – When I told several people I was going to be testing a minivan, the question inevitably amongst those I spoke to was, ‘Do people still drive minivans?’ The short answer is yes. Even in this age of the ever-ubiquitous SUV and the now fast emerging market for ultra-luxury SUVs, minivans still fill an important market segment here in Canada and in the United States.

In Canada, some 42,7000 minivans were sold last year, and in the United States some 272,000 were sold during the same time. Not bad for a type of vehicle that some consider to be going out of style.

The 2021 Chrysler Pacifica Pinnacle that I got a chance to drive is a mid-cycle refresh that might at first blush look a bit tame when compared to other similarly priced vehicles on the road. But don’t be fooled. Here you get a quality and luxury that should make those who bought some of those ultra-luxury and ultra-expensive SUVs envious.

At first glance, you will notice that Chrysler has added some nice external touches that add a sense of sharpness and style to the much-lauded Pacifica. For instance, the front now features what the automaker calls a ‘heroic 3D grille’ with the iconic Chrysler wing badge front-and-center. The grille is framed by new cats-eye LED headlamps and LED fog lamps that give this Pacifica Pinnacle a solid look without coming across as overly aggressive. The rear sports new LED taillamps as standard and give the Pacifica a distinct appearance.  And to round out the package, this AWD version that I drove came with 20-inch polished aluminum wheels that add to the firm stance of this Pacifica. Oh, and I got the Velvet Red Pearl exterior colour, which in my opinion is one of the nicest colours I’ve seen in a while. 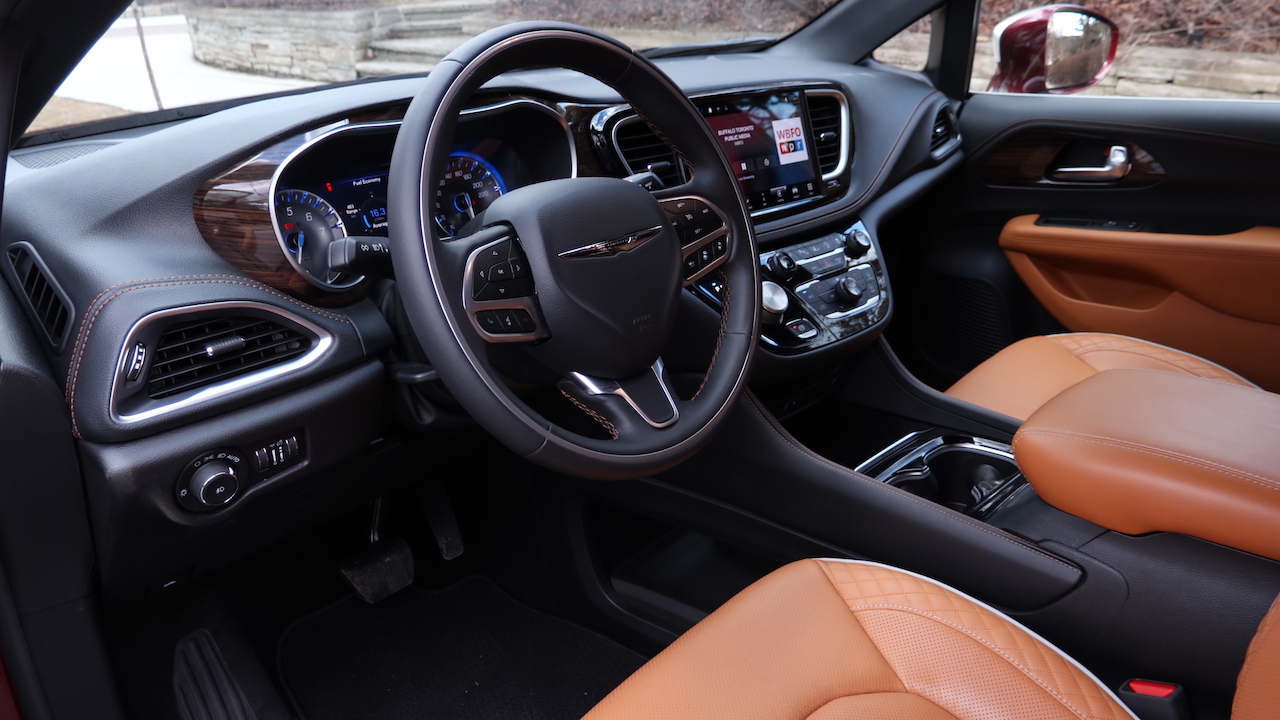 Underneath the hood, this 2021 Pacifica Pinnacle comes with a 3.6-litre Pentastar V6 engine wedded to a 9-speed transmission that can put out 287 horsepower and some 262 lb-ft of torque. Acceleration was smooth and the shifts between the gears unobtrusive, and even with the long gearbox the steering was spot-on and accurate. What pleasantly surprised me was the handling. I’ve often found vehicles this big difficult to manoeuvre. That was not the case here. It took corners accurately and the suspension kept the vehicle firmly planted to the road while providing one of the smoothest rides I’ve had in a long time. The all-wheel drive also is also intelligent, capable of transferring all the available torque to the rear wheels if needed. And the range of safety features it comes with – pedestrian and cyclist emergency braking, land departure warning, forward collision warning with emergency braking, etc. – adds to the driving comfort.

When it comes to the interior, Chrysler has taken a page from the ultra-luxury SUV market. There is nothing about this interior that would suggest you are sitting in a traditional minivan. You get heated and cooled front seats that come in nice Nappa Caramel leather and perforated inserts and two-mode ventilation for heating and cooling. The quality stitching just adds to the comfort when sitting in them. The leather covered and heated steering wheel with the same stitching, suede headliner and the premium door trim panel all add to overall luxury feel. A nice touch is when the vehicle starts on a cold day, it will note what you set for your interior temperature and begin warming up the interior, seats and steering wheel.

The interior is also incredibly quiet as well. I drove for some time on the highway and even with the aggressive winter tires I had on, the road and tire noise was kept to a minimum.

There is plenty of legroom for both the front passenger and driver, and because the Pacifica Pinnacle foregoes a traditional shifter and replaces it with a large dial to the right of the driver – more on that in a little while – you get a centre console that provides quite a bit of storage. There is a very deep cubby under the armrest as well so there should be no complaints about not having enough storage. And the cup holders are large enough that you can put two full-sized water bottles in them. 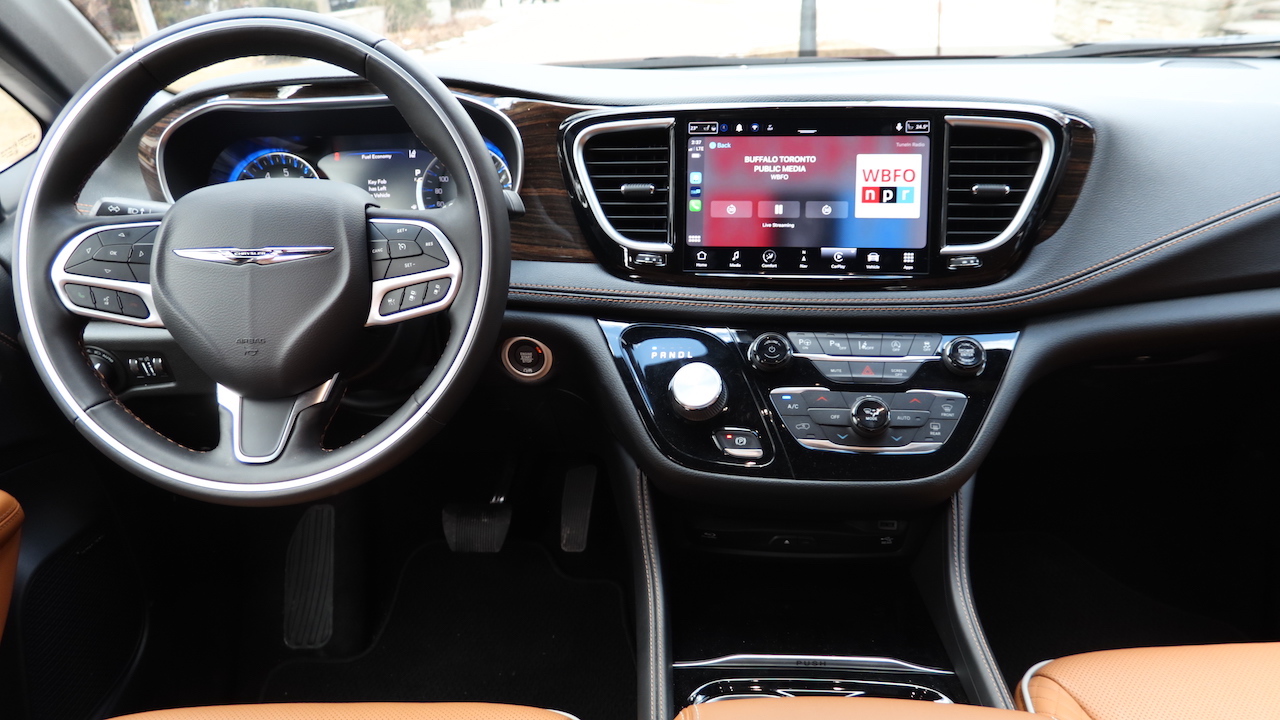 Below the climate controls is a nicely concealed spot for you phone, a wireless charger, USB charger and even a Blu-ray player, so you can pop a film in for the kids sitting in the back two captain’s chairs that come with their own screens when sitting in them.

Those two screens can be flipped down when not in use. A nice touch is the range of standard games such as checkers and chess that the kids can play. As well, a FamCam camera allows parents to keep an eye on the little ones, great for the parents but not, I suppose, for the kids who now can’t get up to mischief because Mom and Dad will now catch them. Sorry kids.

I should also mention that the third-row 60/40 split seats stow away with ease by a simple push of a button. I’ve only seen this in more luxury and higher end SUVs, so kudos for Chrysler for adding that feature. There is plenty of legroom in the back so I doubt you will hear complaints about people feeling cramped.

The central console’s 10.1-inch infotainment touch screen is powered by the new Uconnect 5 operating system and offers a range of customizations and comes with support for Apple CarPlay, Android Auto, and SiriuxXM. While the Uconnect 5 can support Amazon Alexa, I never got a chance to use it as I don’t use Amazon’s assistant. Now, being the audiophile that I am, I very much appreciated the Harman Kardon audio system with its subwoofer and 760-watt amplifier. 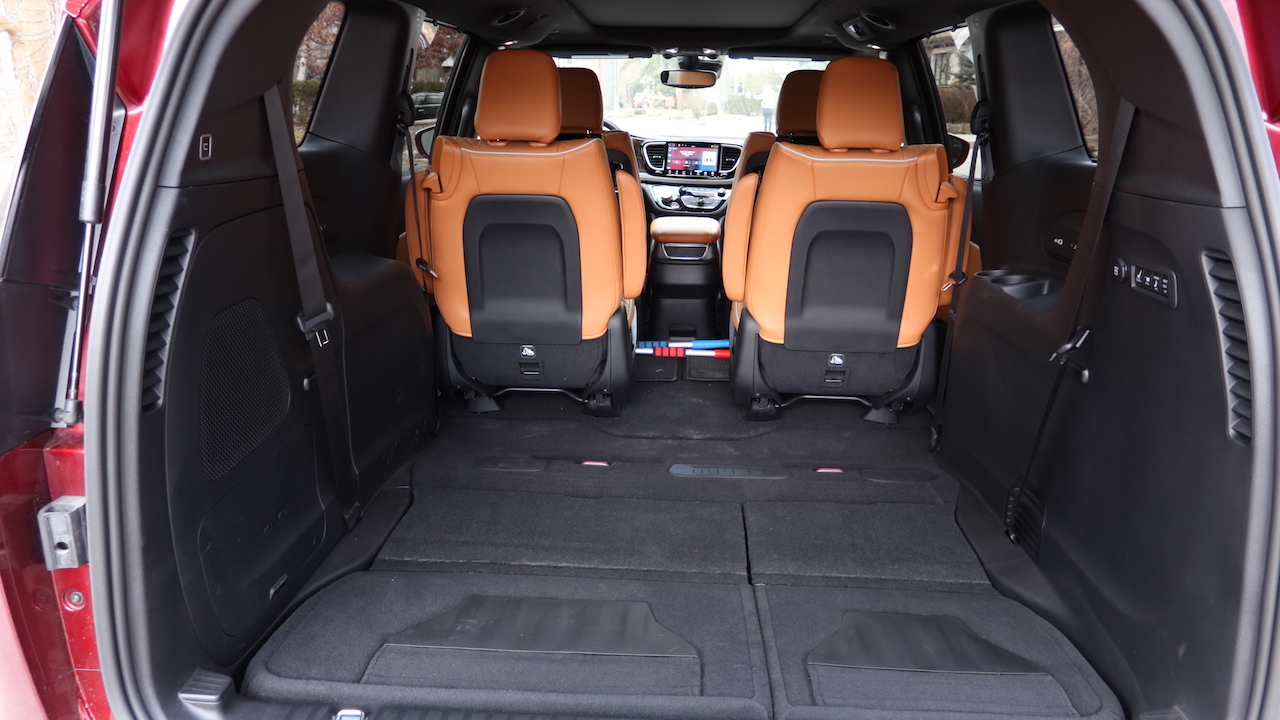 I should give top-marks to Chrysler for making many vehicle functions accessible though a simple and large buttons.  But my favourite feature was the large shifter wheel that sits just above the parking brake button. When I first saw it my reaction was, ‘That’s unusual.’ But after a few moments I came to see it as brilliant. Since we are moving to more drive-by-wire systems, a knob makes perfect sense. Simply turn the knob to Drive, Reverse, Park Neutral etc. and away one goes. It is simple and elegant . . . and really should be much more common in today’s modern vehicles.

So yes, while SUVs have come to dominate the roads in Canada, Chrysler with its 2021 Pacifica Pinnacle shows that a well-appointed minivan can give plenty to Canadian drivers.

Uganda Auto Reviews is by Bat Used Car Depot. Check out some mini-vans and vans in our online car bond. Visit our physical car bond in Kampala for free inspection and test driving.