After launching its first-ever SUV (GV80) and an all-new version of its mid-size sedan (G80) last year, Genesis is about to roll out a refreshed version of its G70 sports sedan, which is extensively updated for 2022.

It’s fitting, in a way, that the G70 would be the last to be updated given that it was the first bespoke Genesis to hit the market more recently (2018) than its bigger stablemates. The original G80 and G90 sedans, as you may recall, were essentially rebadged Hyundais ported over to Genesis when the Korean auto giant launched its luxury division in 2016.

At any rate, after just three years on the market, the G70 is new again. It’s not the start of a second generation just yet, but the new car has changes that run deep as the photos attest.

To christen the impending arrival of the ’22, Genesis Canada set me up with an early production model, which I spent the better part of a day driving last week. I’ll run through my impressions shortly, but first an overview of the updates. 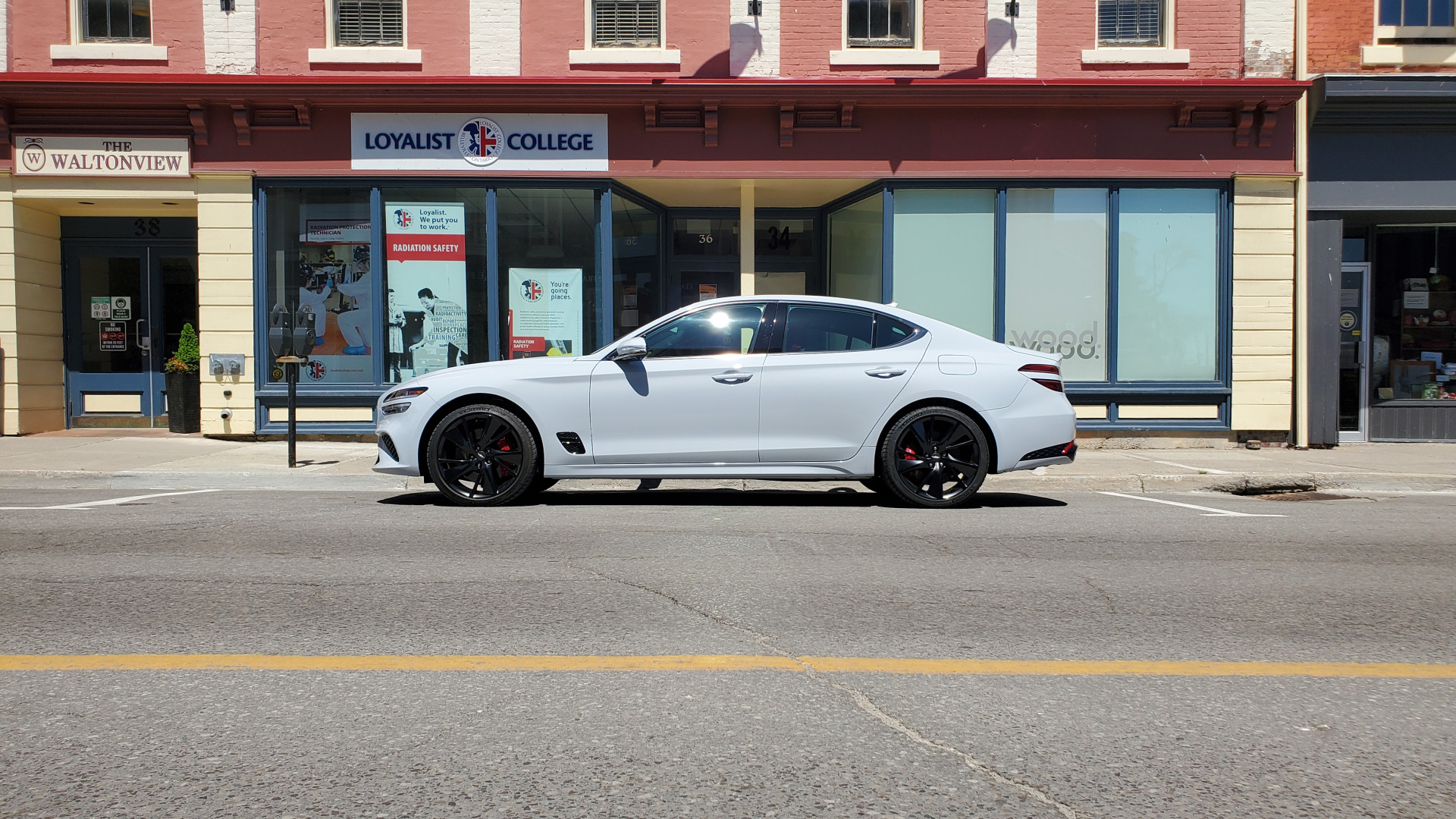 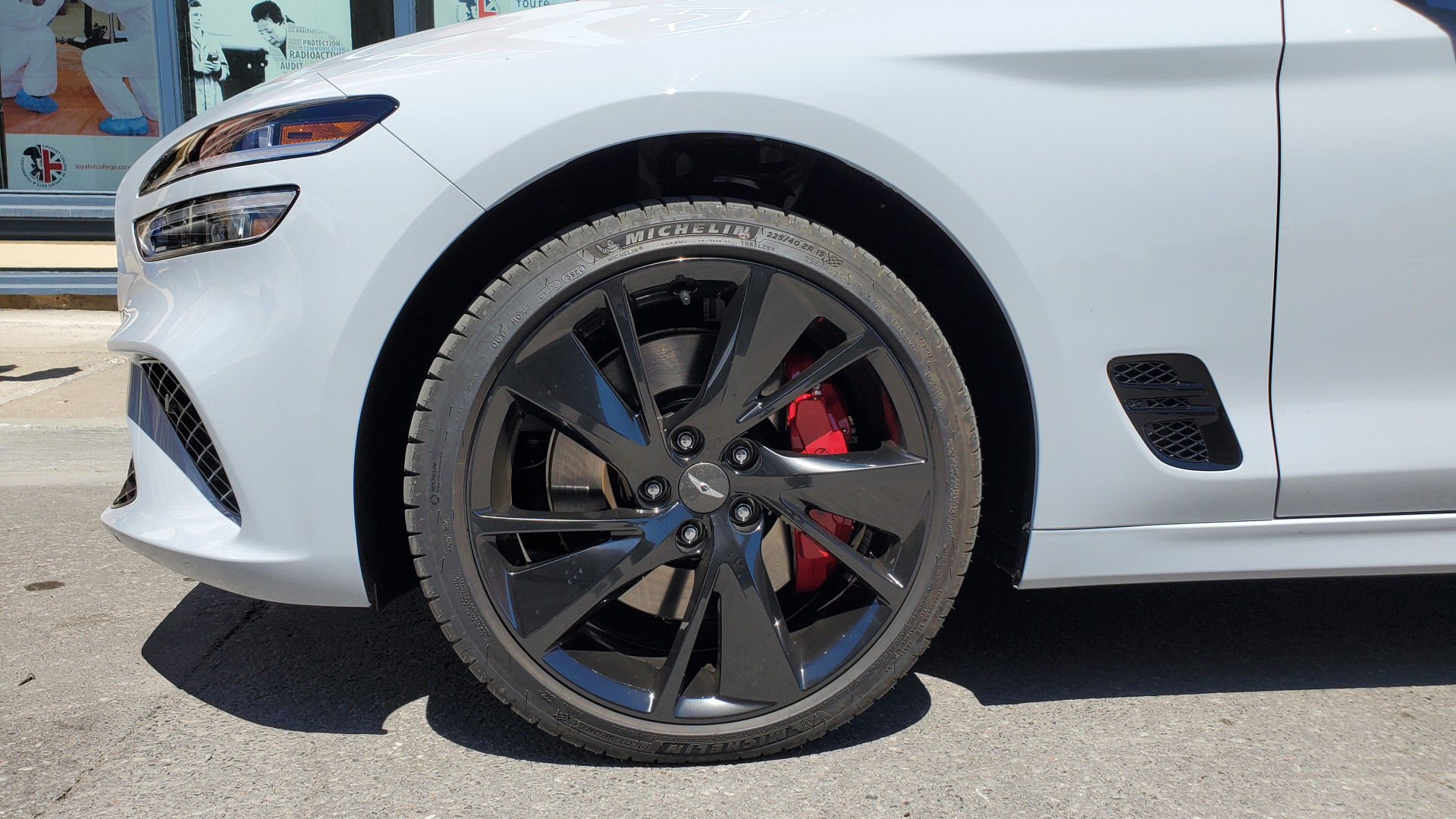 The biggest mechanical change intenders should take note of is the G70 can no longer be outfitted with a six-speed manual transmission and rear-wheel drive. This combination, a favourite of enthusiasts and auto journalists (myself, included), was offered with the 2.0-litre turbocharged four-cylinder (252 hp / 260 lb-ft) engine on the outgoing car, but Genesis had scrapped it for 2022.

Moving forward, all G70s sold in Canada, both with the 2.0L turbo four and the 3.3-litre twin-turbocharged V6 (365 hp / 376 lb-ft) are paired with an eight-speed automatic transmission and all-wheel drive. Interestingly, rear-wheel drive remains on the table for U.S. customers, and with both engines.

In terms of exterior styling, the G70 is now aligned with the rest of the Genesis lineup. Its sports signature brand design cues, such as quad lamp LED headlights and taillights and a large pentagonal crest grille, which are key pillars of the automaker’s Athletic Elegance design language. Other prominent elements include G-Matrix mesh, rear body colour diffuser surround, side air extractors and a variety of 18 and 19-inch wheel designs. Eleven exterior colours are available, including three new ones: tasman blue, cavendish red and melbourne gray (matte). 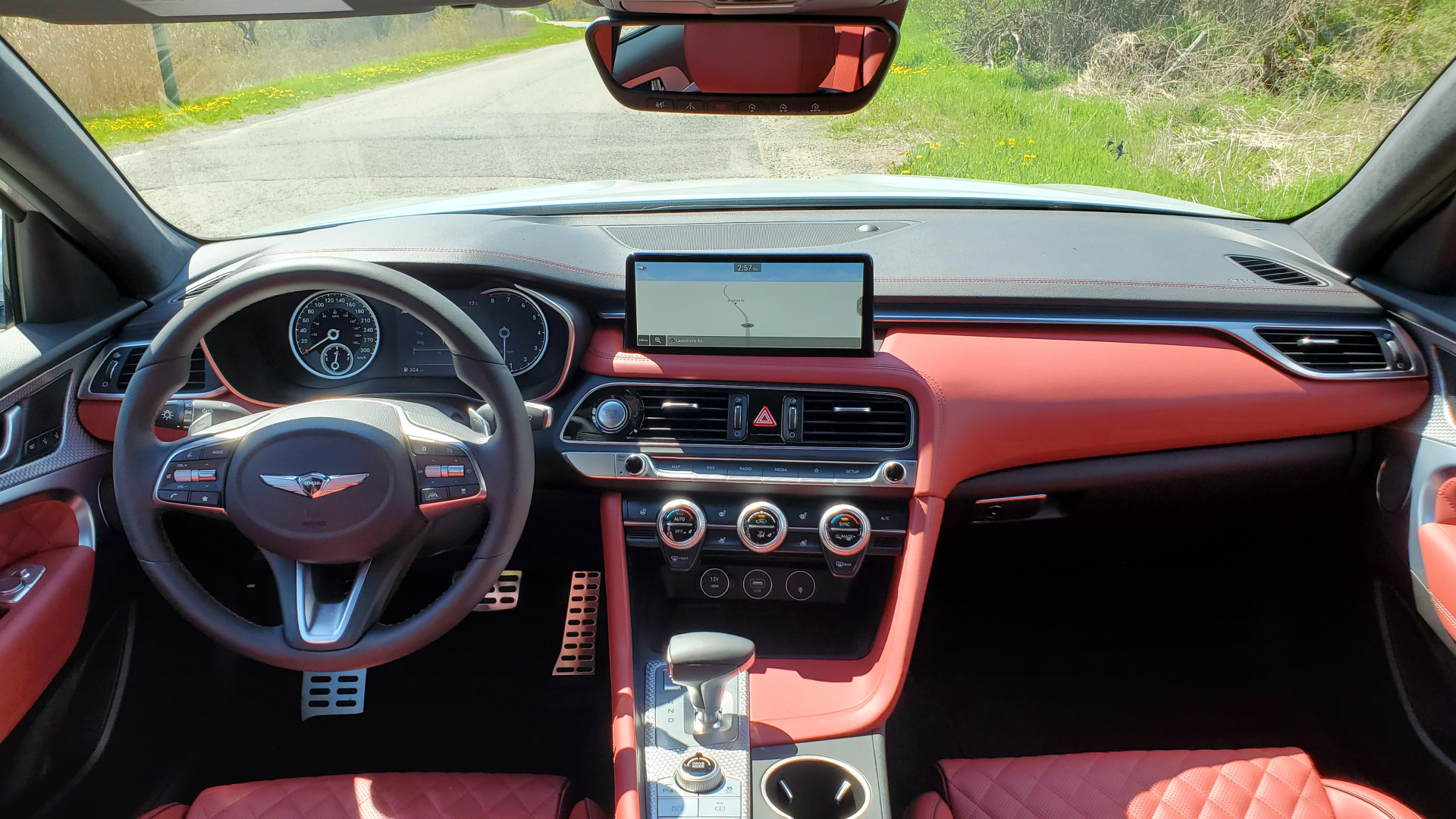 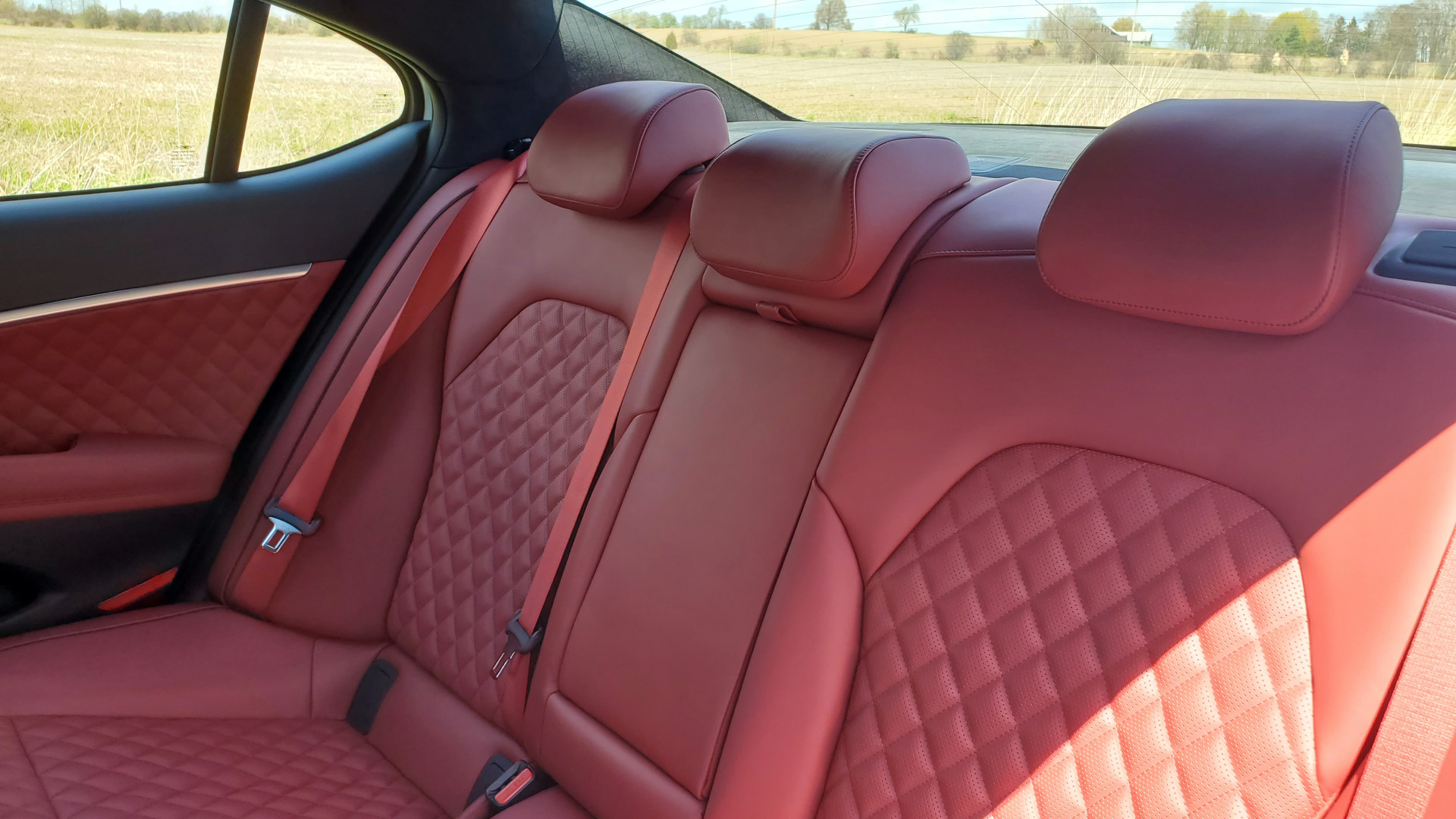 Leather seating is standard on all models above the base 2.0T Select, which receives leatherette materials, and Nappa leather is standard on Prestige, Sport and Launch Edition grades. Speaking of models, six G70s will be sold in Canada. A breakdown with pricing is listed below.

As mentioned, I spent a day with the 2022 G70 and came away from the experience impressed with the changes. My tester, a 3.3T Sport tester finished in Siberian ice with an Obsidian black/Sevilla red Nappa leather interior looks great, is absolutely loaded with amenities and is a blast to drive.

The 3.3L twin-turbo V6 is a willing powerplant with a flat torque curve (peak output starts at 1,300 r.p.m.) that can produce hasty getaways from rest, and at speed, regardless of drive mode. The steering effort and suspension tuning does not change noticeably with the drive mode selector, but the sport setting bumps engine revs by about 1,000, delays upshifting and produces a barkier exhaust note. Sport also cranks up the seat bolstering to pinch your sides to gently remind you a more dynamic driving experience awaits. 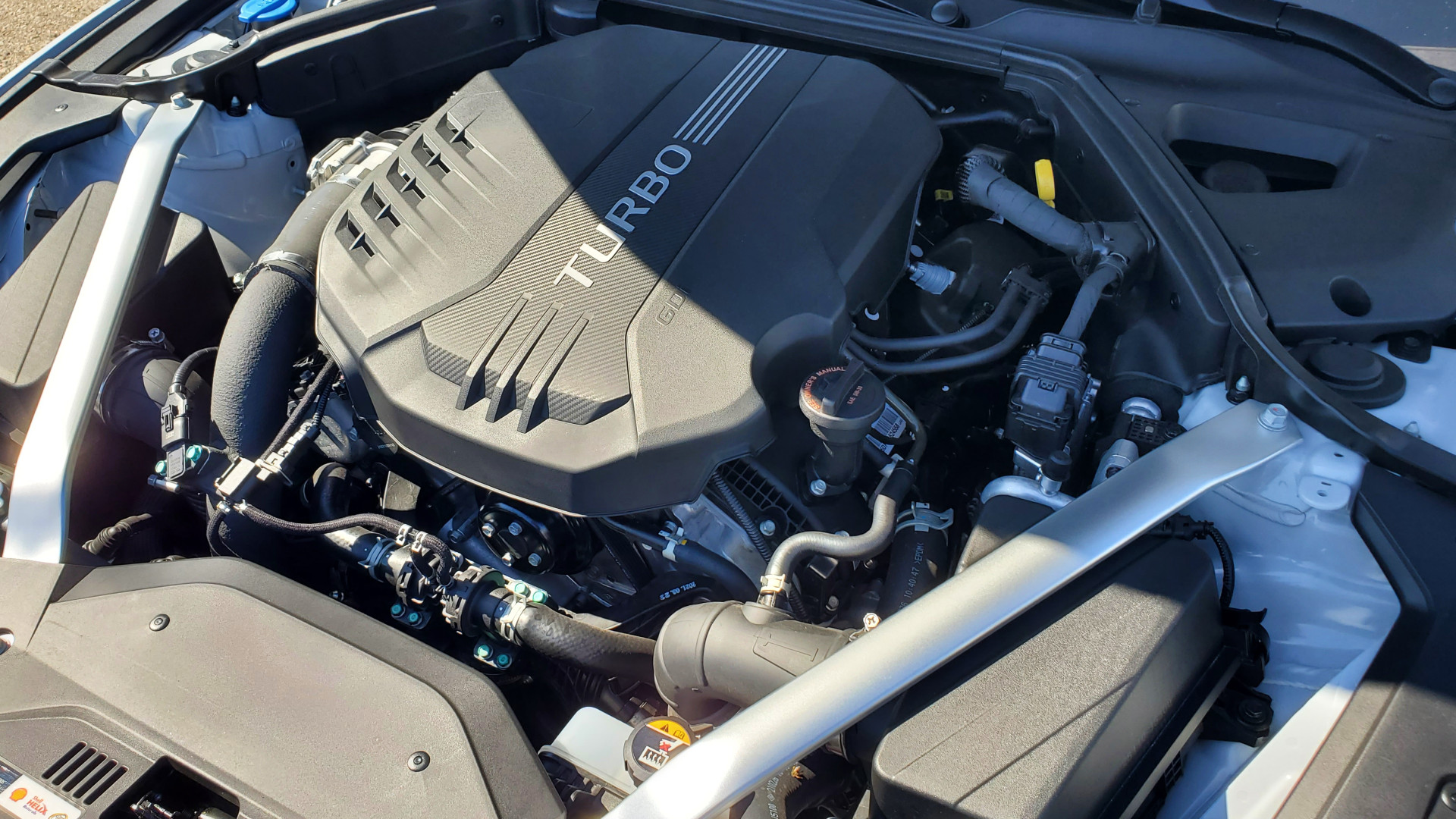 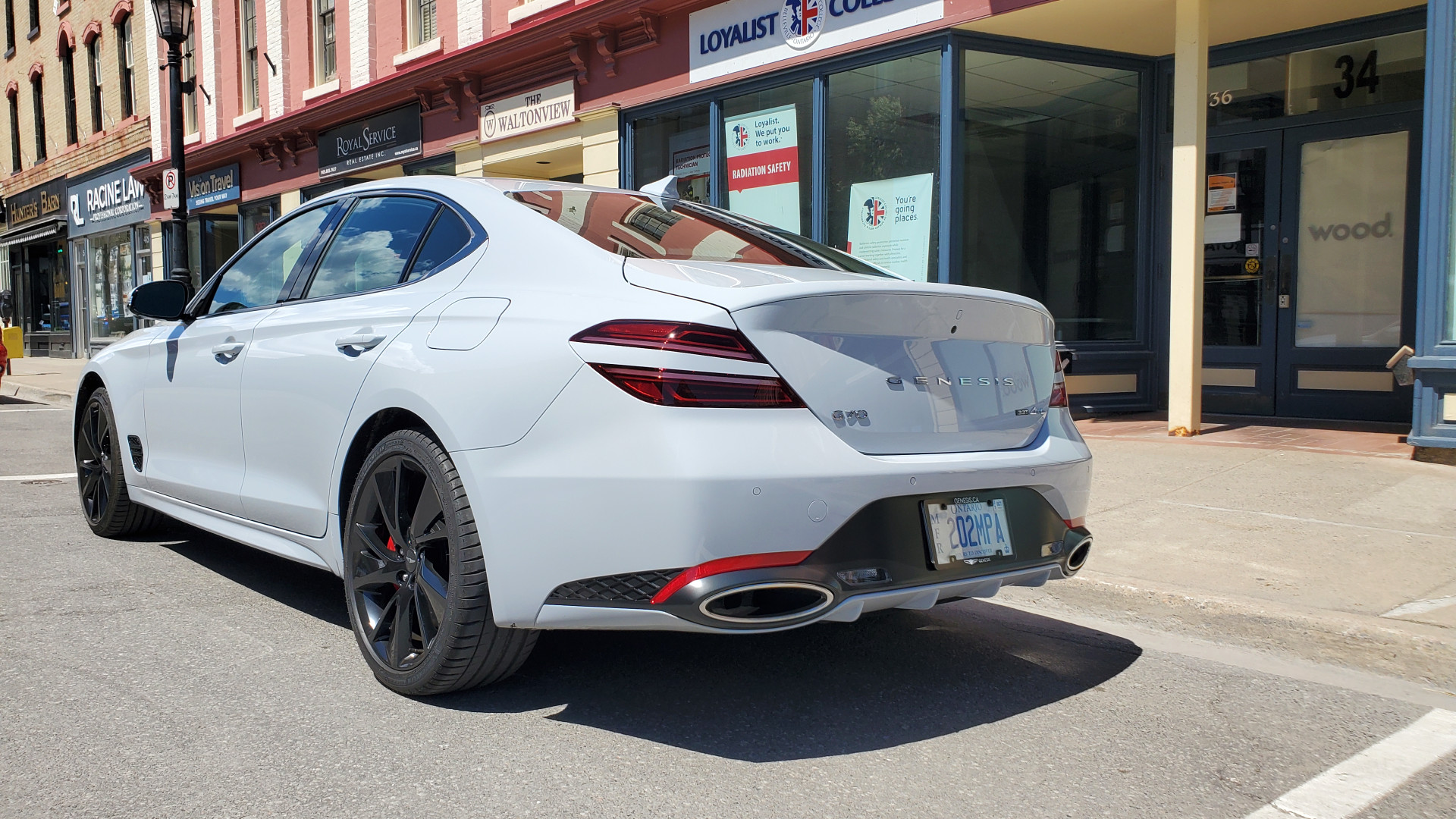 And it’s pretty fun, I’d say. For a moment I daydream about how much more engaging this package would be with a three-pedal setup and rear-wheel drive before snapping back to our shared reality that mostly shuns the manual gearbox. So, we must make do with paddle shifters instead, which aren’t all that bad, especially on twisty two-lane roads.

On a sunny day, with the sunroof open, windows down, music up and a quilted Nappa leather seat holding you in place just so, the 2022 G70 is poised to become the enemy of short outings.

The 2022 Genesis G70 begins arriving in dealerships this month with V6 models landing first. Four-cylinder models will go on sale later this summer.