Eyeing the first plug-in Jeep now in my driveway, an unintentional new plan after the originally scheduled off-road-busting Canadian first drive media event was cancelled, I noted the irony that this 2021 Jeep Wrangler Unlimited Rubicon 4xe plug-in model before me was both the new planet-friendliest of Wranglers, but also the burliest off-road Rubicon model, meant to tackle trails and climb rocks for rather earth-unfriendly adventures.

When it comes to Jeeps, change tends to come slowly. Especially with the retro-inspired Wrangler, as one can still remove its doors, lower its windshield, and remove the entire roof, with styling still largely based on the military Willys MB vehicles dubbed jeeps in the 1940s. These days, it is still marketed as an adventurous off-roader first and foremost, plus the only four-door convertible on the market in Canada. And now, with the introduction of the Wrangler 4xe, the only convertible plug-in hybrid on the market as well.

I knew I had to call in my Wrangler-owning buddy for a closer look, as we had shared some good road trip times with our families over our last unrestricted summer, soon after he had bought his ’19 Wrangler Unlimited Sahara.

Having helped him remove the roof on his four-door SUV to make it a sunshine-friendly cruiser, I knew he’d get a major kick out of seeing the changes to the new electric top-of-the-line version, not only because he was a Jeep Wrangler owner, but also as an electrician and pickup owner that had been intrigued by the upcoming new Rivian all-electric pickup truck, both professionally and personally.

This Wrangler 4xe is a much less radical beast than the BEV Rivian, as the 4xe (pronounced ‘four by ee’) model is really just a regular JL Wrangler that adds a beefy 17.3 kWh lithium-ion battery under the rear seats to allow it to be plugged in to any wall socket, or a Level II (L2) EVSE. On a full charge, the Wrangler’s anti-aero body shape and heftier weight (5,222 lb for the Rubicon 4xe) means it is only rated to provide up to 35 km of all-electric range.

Even then, that official 35 km range estimate is a best-case scenario, one that it came close to actually achieving once in my couple days with it, during some reasonably warm mid-teen spring temperatures, when the range hit 33 km. Despite multiple L2 recharges, it didn’t manage to achieve 30 km any other time over mostly rainier and chillier single digit temperatures, with some highway driving (and all range tests done with climate control set at 21.5 degrees). That said, it was tough to measure exactly how much all-electric range it truly offers, because even in its Electric mode that’s supposed to keep only the electrons flowing until the electrons run out, unless you mash the accelerator, the system would occasionally unexpectedly revert to using gas.

For comparison’s sake, the 4xe’s official 35 km range is 16 km less than the 51 km offered by the much larger Chrysler Pacifica Hybrid, from a slightly smaller (16 kWh) rated battery in a vehicle that weighs within 200 pounds of the Wrangler 4xe, depending on the trim.

Clearly, being the most efficient Jeep doesn’t necessarily equate to being a very efficient plug-in hybrid.

Even being the most efficient Jeep is highly dependent on Wrangler 4xe owners plugging it in on a regular basis, to achieve anywhere close to its impressive combined fuel efficiency figure of 4.8 Le/100 km. Once that grid charge goes away, the Wrangler 4xe works as a normal hybrid but on a heavy and aero-unfriendly body, its 2.0-litre turbocharged four-cylinder engine logging an official 11.7 L/100 km in combined city/highway driving. So once that charge is depleted, keep in mind you’re likely using more gas than smaller and lighter Jeep models, and even some Wrangler V6 versions. 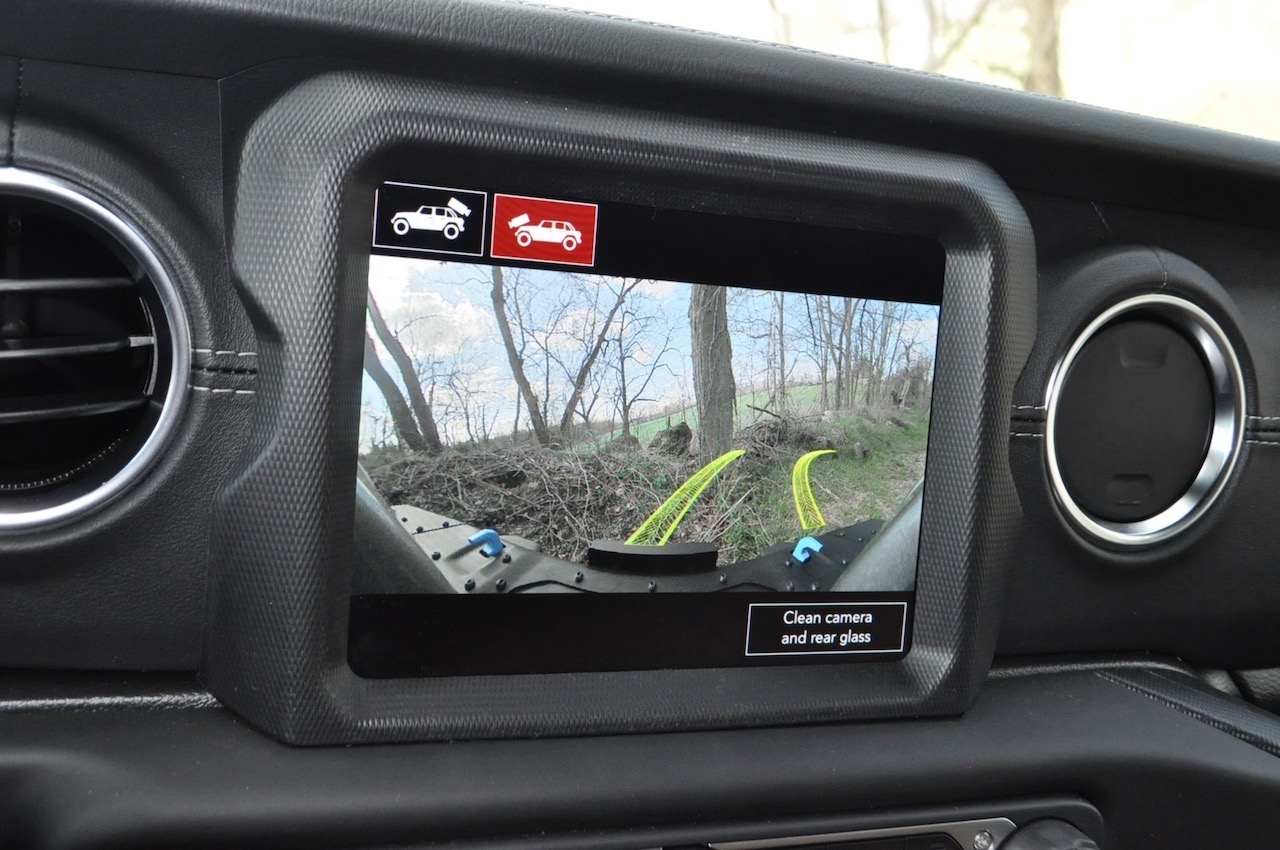 Using a 240-volt L2 connection is the fastest way to charge the 4xe, as unlike the Mitsubishi Outlander PHEV, there’s no L3 DC quick charging available here. The Wrangler comes with a cord that can plug into any wall outlet for a slow 120-volt trickle charge, or an L2 Mopar-branded EVSE can be ordered and rolled into the payments. Any L2 may be a worthy investment for the 4xe, as it drops the estimated recharge time down to roughly 2.5 hours from roughly 12 if you just use the included Level-1 charger, making the recommended L2 useful for quick top ups in between errand running on weekends.

In the U.S., Jeep is installing EV charging stations at trailheads and popular off-roading spots in partnership with Electrify America, many of them solar-powered, said the company, though there are no plans yet for such off-road stations in Canada.

That turbo four-cylinder may be the same engine as in my buddy’s Wrangler Unlimited Sahara, but this is a much more refined beast – as it should be for an as tested price of $74,585. The silence of its start up was the first major difference he noticed, as well as the continued silence at low speeds when in Electric mode, another incentive to keep the 4xe charged up. The Wrangler 4xe increases the power mainly via the large traction motor, and topped up by Jeep’s integrated eTorque starter motor that’s available on other versions too, for a net power output all told of 375 hp, and a massive 470 lb-ft of torque.

It’s no Hellcat, but the Wrangler 4xe is by far the most powerful in the large Wrangler family. 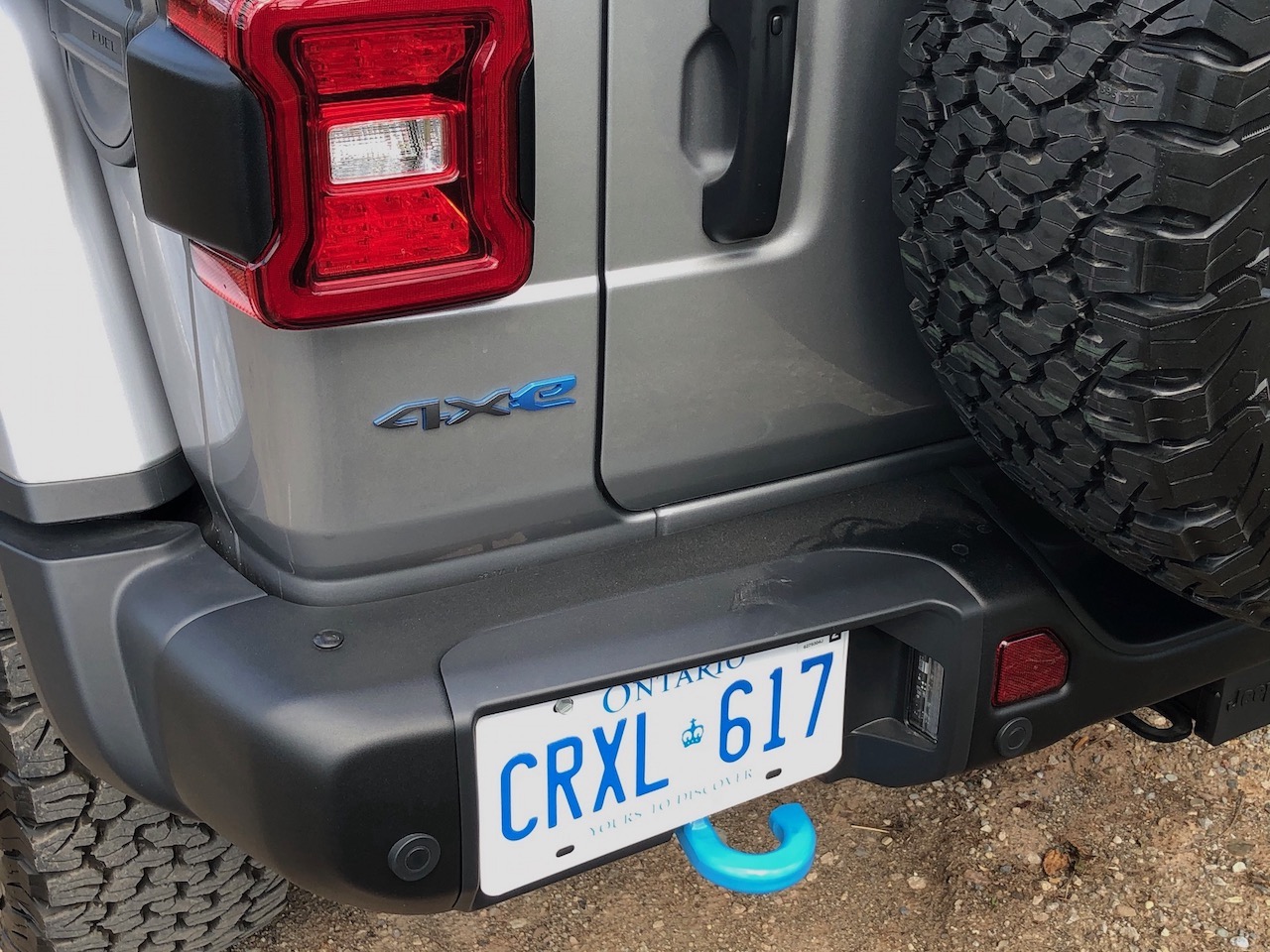 On the highway, he noted right away more jump and passing power than with his 3.6-litre V6 Wrangler Sahara. Like the Porsche 911, the Jeep Wrangler is almost a brand unto itself, with two and four-door models, various hard and soft-top permutations, V6 and four-cylinder models, plus hardcore rock-crawling Rubicon versions that have extra ground clearance with chunkier mud-ready tires and upgraded suspension to better deal with the most challenging off-road conditions. In all, there are 16 versions of the Wrangler in 2021, plus now three new plug-in 4xe ones.

Those Wrangler 4xe models are all well-optioned Unlimited versions, meaning they all have four doors, eight-speed automatic transmissions, and offer standard Hybrid, Electric or eSave modes that let you adjust when you want to use those precious electrons. The Sahara 4xe starts at $54,995, while the top Rubicon rock-crawler model starts at only five dollars more than the $59,990 MSRP than the more luxury-oriented and easier-to-climb-into Sahara High Altitude. Those luxury bits can largely be added back into the Rubicon, such as the leather seats, heated steering wheel/seats and remote starter as on this tester, plus it added active safety option packages and the super convenient but pricy ($3,995) One-Touch power top.

We didn’t have the time or weather conditions to take off the doors and roof completely, as the photo folks down in the U.S. did for the more traditional media launch of the Wrangler 4xe, but even popping off the rear quarter panels and tucking the roof back to its fully open position behind the rear passengers provides way more wind-in-the-hair convertible feel than any other SUV on the road. That massive roof won’t open or close at highway speeds, however, with a warning that ‘speeds are too high for roof operation,’ so decide beforehand.

But overall, he seemed impressed in all but the $75k price of this loaded to the max Wrangler Rubicon 4xe, and both he and his wife still were big fans of the adventure-ready look of this Rubicon 4xe in particular, with its blue front tow hooks and generous ground clearance. All the better to help traverse parts of the earth in this most fuel-efficient and planet-friendly Wrangler.