When I drove the Tesla Model Y Long Range last summer, I remember thinking it was game over for its upcoming rivals. On top of being ahead of the competition by almost a full year, the Model Y was already beating them in range, performance, and cargo space.

By competition, I’m talking about vehicles like this Ford Mustang Mach E, Volkswagen’s ID.4, and later this year, Nissan’s Ariya.

I was, however, genuinely curious to see how Ford’s Mach-E would perform. I was among the skeptics when Ford announced it would slap the legendary Mustang name and logo on an electric crossover. But I was also genuinely curious to give it a shot. And now that I have, I can totally understand some consumers are preferring this Ford over a Tesla, even if the Mach-E does fall short in some areas.

Ford will never admit this, but it’s obvious that the Mach-E tries to copy the Model Y. Part of that reality is a little sad, that fact that Detroit is playing catchup with Elon Musk’s business. But it’s also a sign of humility from Ford. It’s also choosing to evolve in this new world.

The Mach-E is of considerably the same size as a Model Y, with prices and packages coming neck to neck with some of Tesla’s offerings, but the Mach-E is available in more configurations. 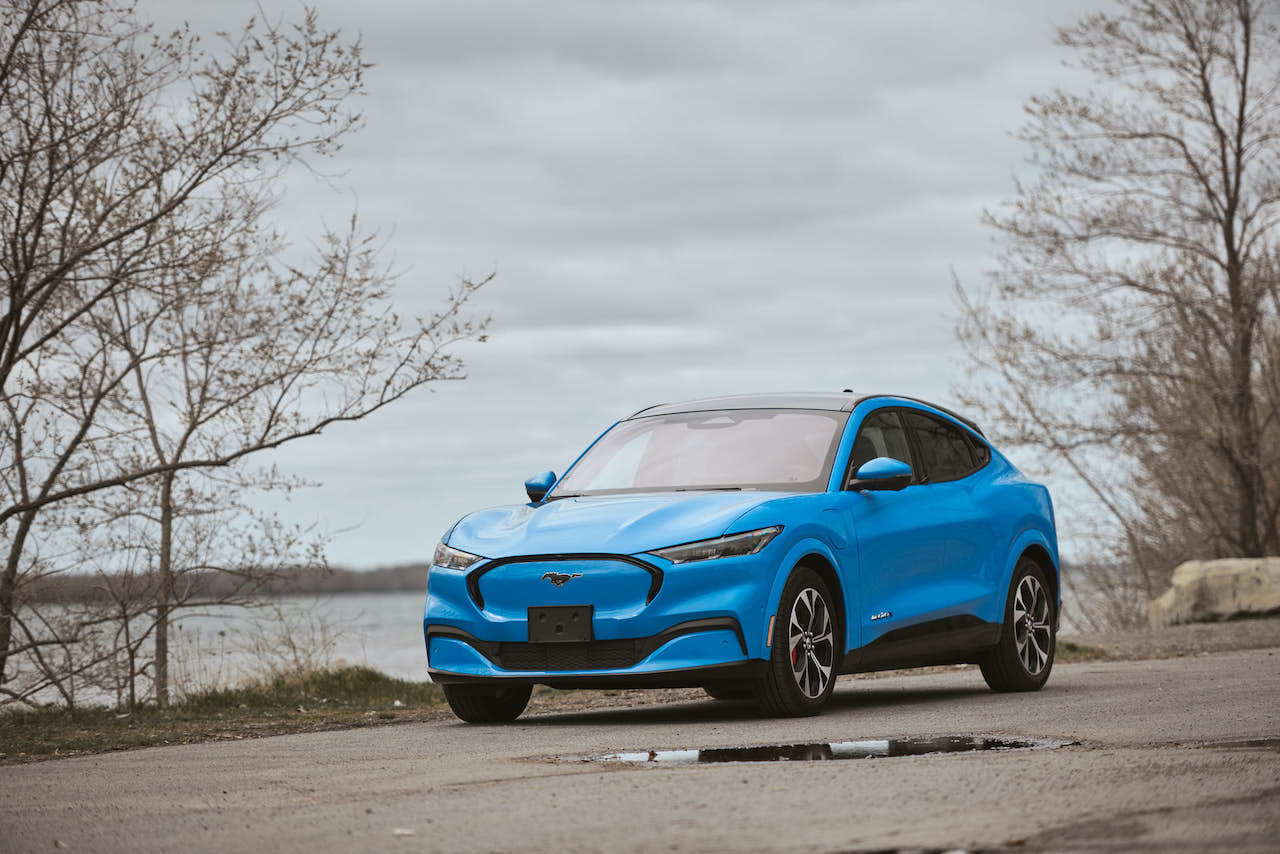 Ford offers it in both rear and all-wheel drive, with a choice of a 68 kWh or 88 kWh (usable) battery capacity. Range is EPA certified between 375 and 480 km depending on the battery. Pricing kicks off at $52,495, which is cheaper than a base Model Y (until the Standard Range Plus returns) and extends all the way to $82,995 for the high-performance GT model.

The one we’re driving is a First Edition all-wheel drive with the larger capacity battery, for a final sticker price of $71,695. Range is rated at 435 km. In this configuration, the Mach-E will hit 0-100 km/h in about five seconds flat, which is neck-to-neck with a Model Y Long Range. However, the Tesla pulls 525 km of EPA-rated range for similar money.

The impact of a name

But the Mach-E isn’t all about numbers. It’s also about the experience of owning an electric Mustang. If you’re offended by the galloping horse being on this vehicle, that’s precisely the point. It gets people talking and has them curious. I had several bystanders ask me questions when I had this car in my possession. It’s just marketing genius.

And it’s paying off for Ford too, as Mach-E sales are off to a good start, already approaching 10,000 units sold in the U.S. and Canada combined. 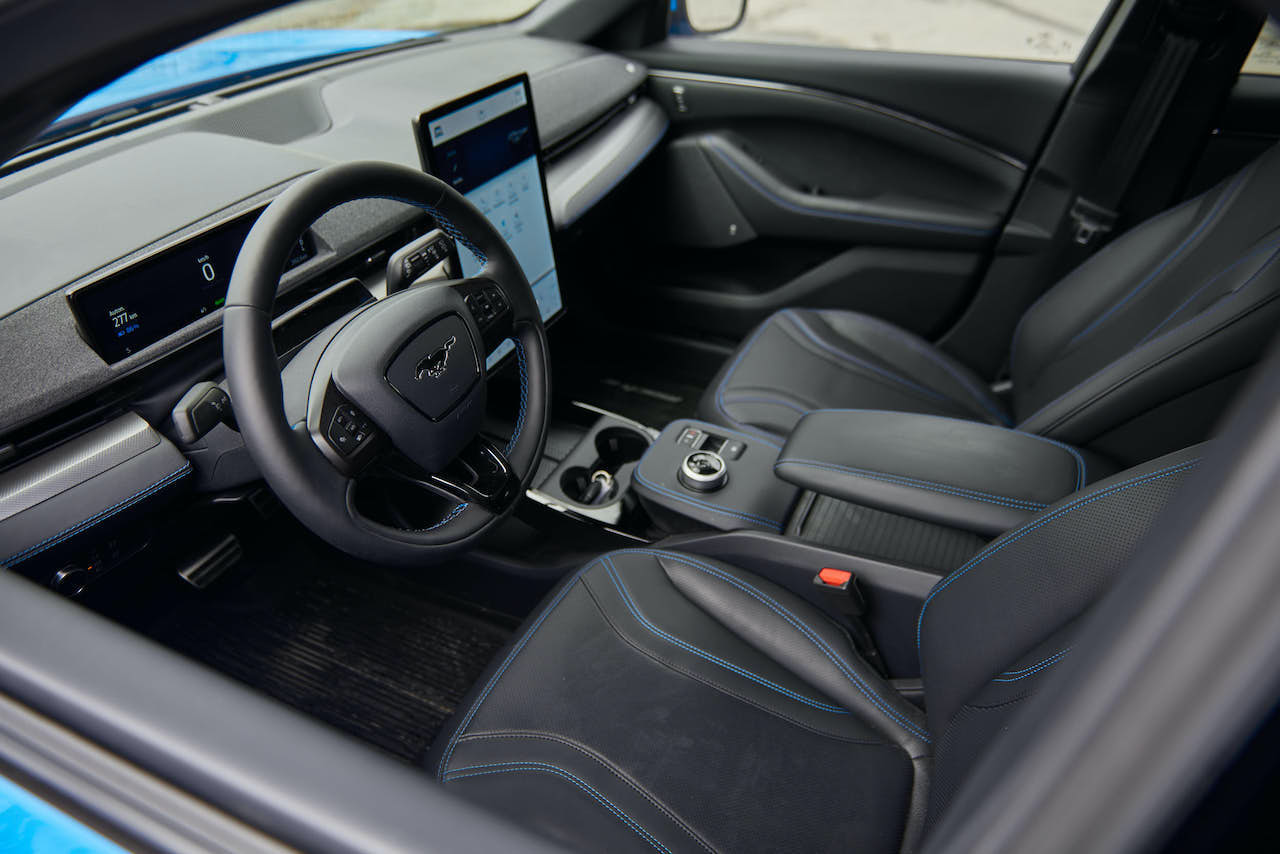 There’s a level of desirability with the Mach-E that can’t be ignored. I’m not sure if it’s the emblem, or the fact that it’s a Ford, but I do know I felt instantly wanting one. It’s the kind of vehicle you approach with some confusion, but you instantly know what it is by its emblem, proof of how powerful branding can get. And the more you look at the Mach-E, the more you appreciate it for what it is. This is a good-looking vehicle. Its design is elegant, sporty but never too loud.

The interior, again, feels very much like a Model Y’s in the sense that you’re sitting in what is essentially a large tub. Cabin design is minimalist, and just like in a Tesla, all the car’s controls are encapsulated in one large central screen. Except Ford gives you an actual (still digital) gauge pod.

Exiting highway offramps at full throttle in the Mach-E should spice up your daily commutes. This is a fast crossover by any measure. In typical EV fashion, a slight stab at the throttle launches this crossover forward with haste, but also in utmost quietness. Ford gives you available drive modes with “propulsion” sounds. They also firm up steering response and change the throttle’s sensibility (the GT model gets adaptive dampers). Out of the three modes available, Unbridled is by far the most entertaining one as it gives the Mach-E a charmingly convincing induction noise. It’s all synthetic, of course, but it nevertheless gives this thoroughbred some character.

Ford’s electric crossover also transmits wonderful feedback during dynamic driving. The Mach-E’s tires are narrow and tall (225/55R19), so the grip threshold is easily accessible. If you stomp the throttle coming out of a corner with traction control off, the Mach-E will kick out its rear and grant you cute little power slides in return. It’s a highly precise machine. The level of control is also immense at high speed thanks to a heavy vehicle that carries most of its weight in the floor. 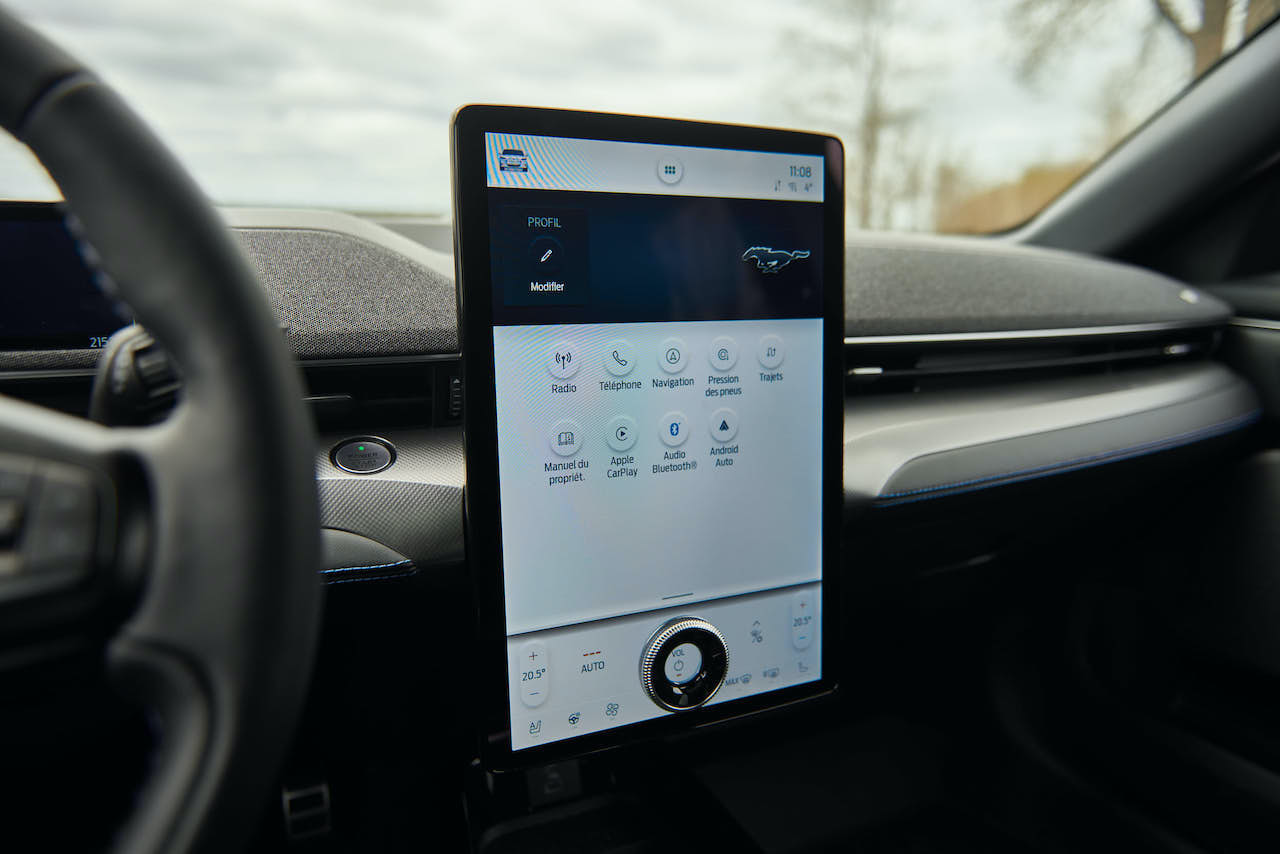 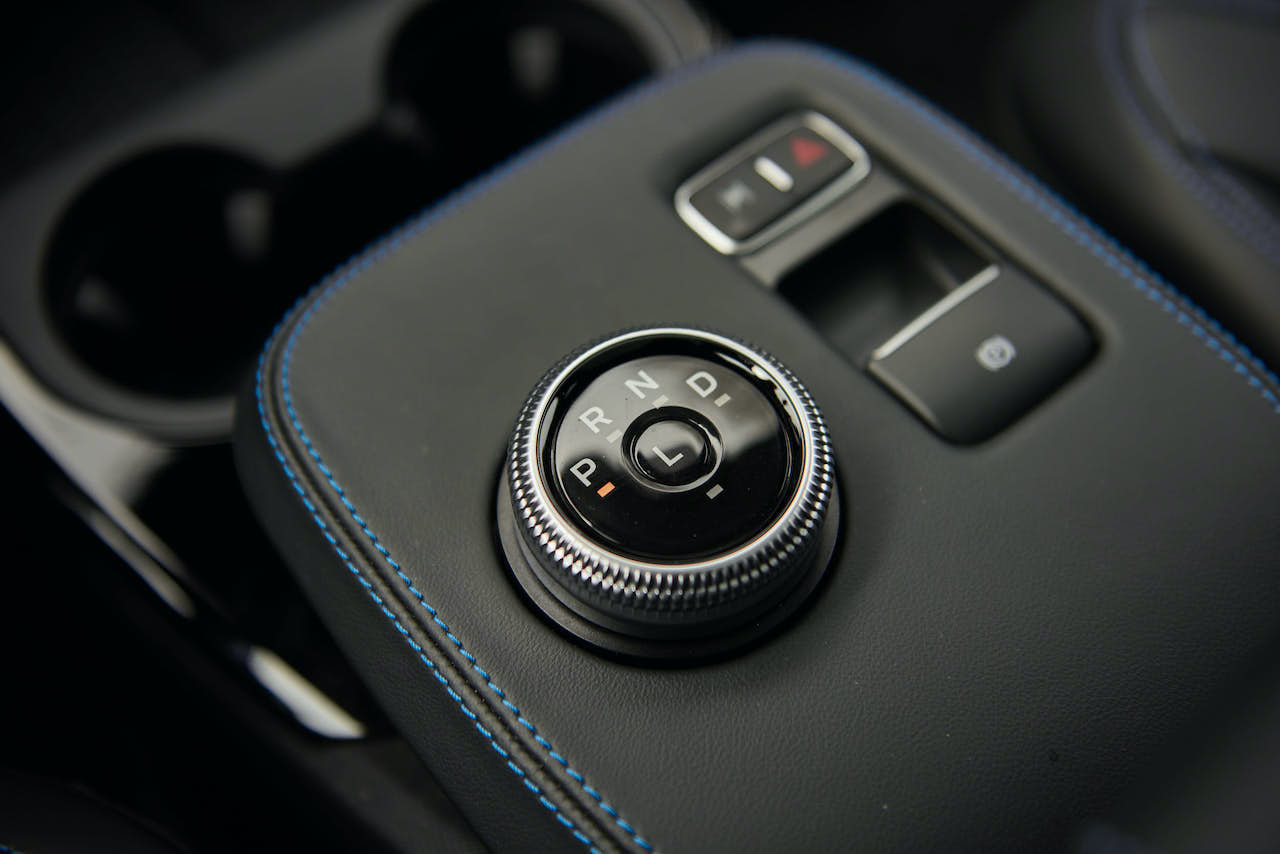 The Mach-E’s cabin is well put together, feels modern and comes with a good selection of available materials. The seats offer good support for long rides, while always remaining plush and soft. Ford’s Sync infotainment software is a handy companion, with a wide range of flexible configurations and features, as well as detailed information on where your energy went. However, the lack of an actual home menu confuses the system’s operation. Wireless Android Auto integration was also done well, with a neat presentation, and only very occasional disconnections.

As for real-world range, we never managed to hit Ford’s 435-km promise, but a 300-km trip at temperatures of about five degrees gave us an energy consumption average of 23 kWh/100 km, and with 40 km left to go once at destination. It manages its energy well, but know that a Tesla Model Y can still do better.

Some will tell you that the Mustang Mach-E doesn’t come with an established Supercharger network like a Tesla, but with municipalities, provinces and countries now injecting large sums of money in a sustainable charging infrastructure, that argument is running thin. Plus, EV drivers generally buy a home charger with the car in the first place, allowing them to always leave the house with a fresh set of electrons.

As for Ford’s first attempt in the electric crossover world, however, it’s hard to look past the Mach-E’s overall experience. At the end of the day, no matter how it’s called, this is a driveable, liveable electric crossover that both looks fantastic and drives great. More importantly, it proves that an emblem can in fact add value and desirability to a vehicle.