The Chevrolet Suburban has been just about the only choice for buyers wanting to haul seven people, a week’s worth of gear, and bring along a boat or other hefty trailer behind them. That doesn’t mean it’s been the best choice for all of those years, but for the vehicle’s 12th generation, the ‘Burb has changed in a big way.

Past Suburbans have just been copies of Chevrolet’s latest pickup with more bodywork and more seats. This time, Chevrolet has taken the pickup’s chassis – key to this SUV’s functionality – along with its powertrains and binned nearly all the rest. Starting with a new independent rear suspension that contributes to a massively improved ride. No longer does the Suburban feel like a school bus, instead offering better rear grip thanks to letting the rear tires move independently and stay flat to the pavement, a stiffer platform, and, thanks to the available air ride adaptive suspension and magnetic ride control, a ride that is as good as any mainstream three-row crossover. Even without the fancy suspension options, this new SUV platform offers previously unavailable levels of comfort, but with them, this becomes a top-tier highway cruiser.

What usually holds the Suburban back during highway cruising duty is size, heft, and thirst. No matter how good GM’s gas V8s and 10-speed auto are (and both 5.3- and 6.2-litre V8s are a treat), they’re still thirsty. This Suburban had the new 3.0-litre Duramax inline-six diesel as introduced in the pickups, changing the entire equation.

That diesel engine is thrifty. Adding about $2,000 over the 5.3-litre gas V8 (and equal to the 6.2L High Country), a 4×4 model is rated to get 12.0 L/100 km city, 8.9 highway versus 15.3/12.4 in the gas model. My own 250 km fuel economy test loop, mostly 80-90 km/h highway saw 6.8 L/100 km until a very late series of hills pushed it to 7.0. This wasn’t driving around at 10 under and holding up traffic on a dead-flat road, either. This was driving normally, trying not to stare at the instant economy gauge, while on roads that are twisty and hilly enough to be one of my usual sports car haunts. While beating every non-hybrid crossover of any size I’ve ever driven. 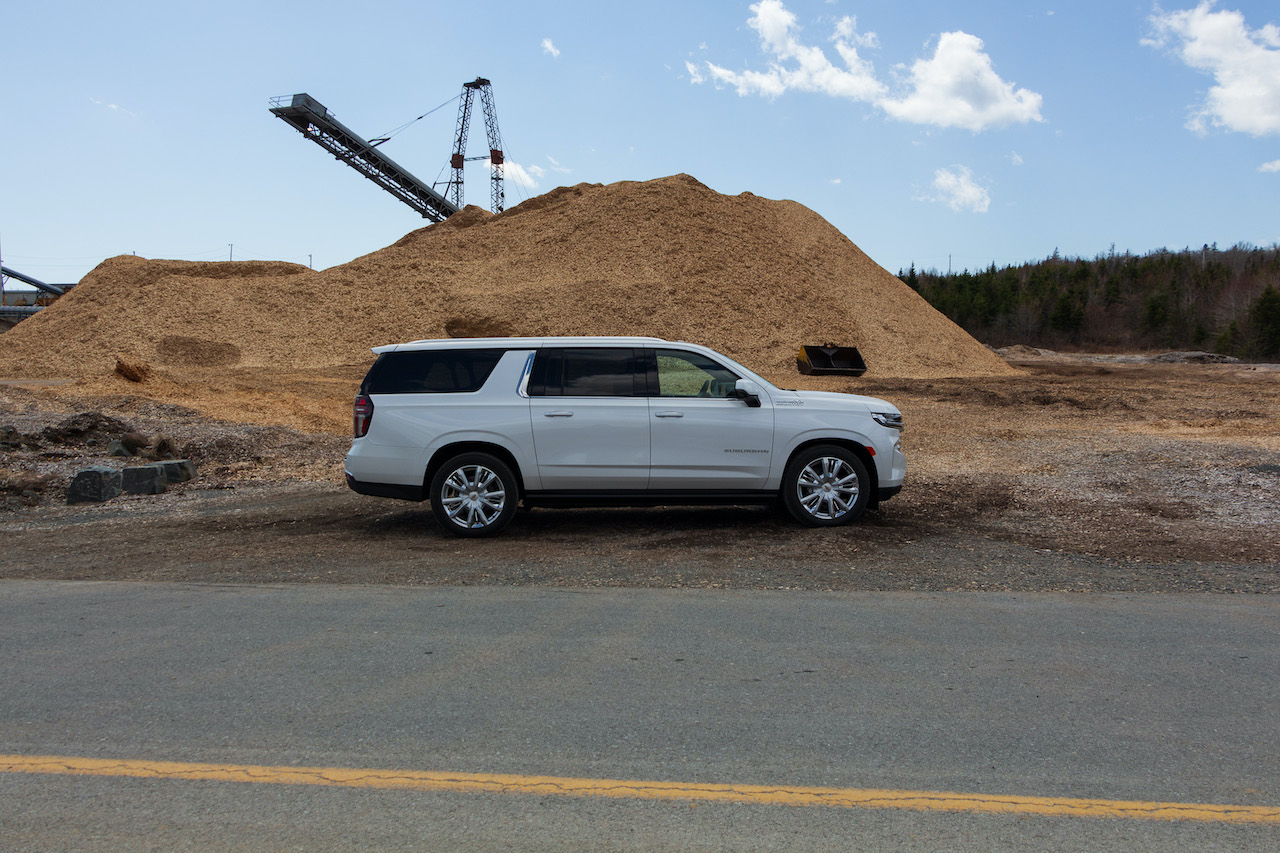 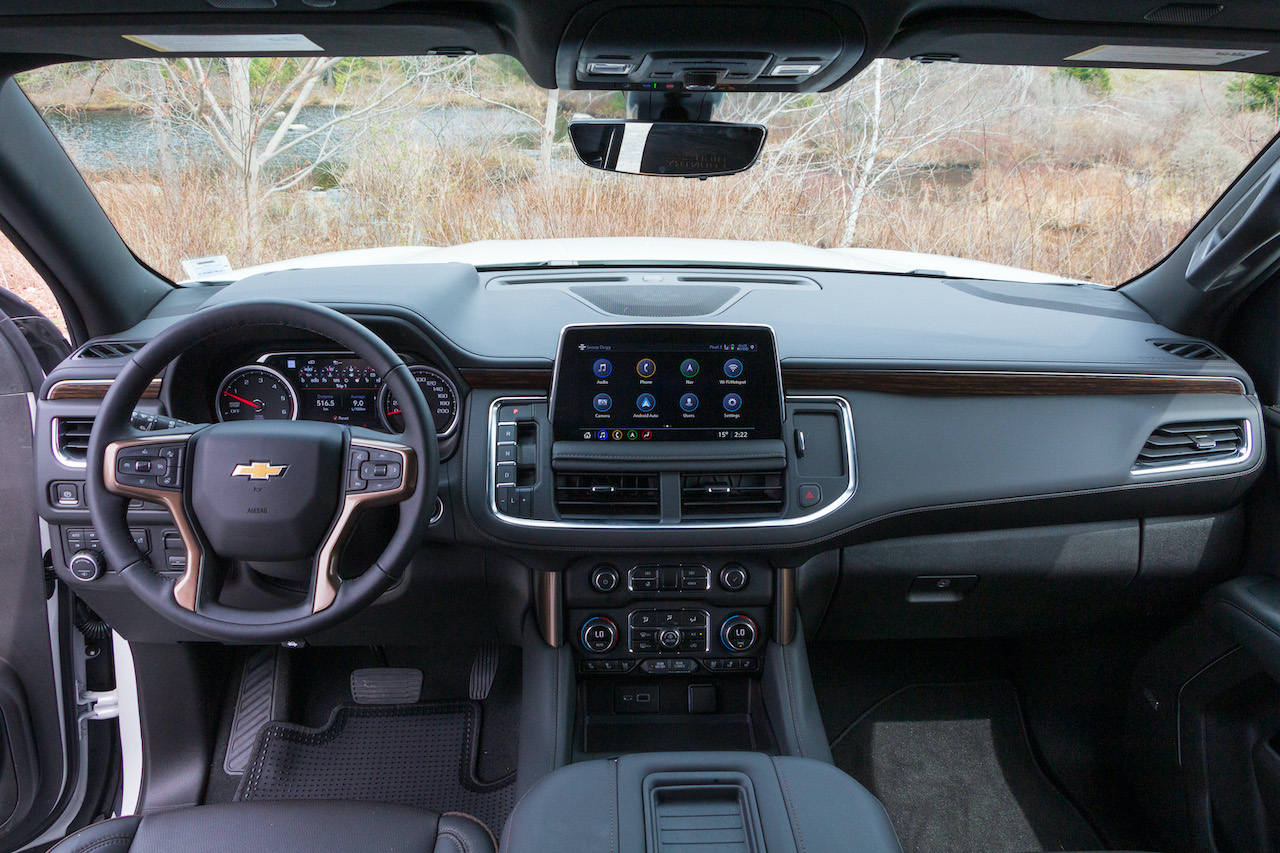 Mixed city driving, an even larger challenge for a vehicle that can hold seven people and haul the best part of 8,000 lbs, was in the nines. With a 2,200 lb auto trailer on the back, 110 km/h highway driving saw fuel economy in the low 10’s, easy to see thanks to GM’s trailering app that remembers your rig and tracks trip economy automatically. With a car on that trailer bringing weight up to 5,500 lbs, 110 km/h, hills, and a headwind, I saw indicated 13.2 L/100 km, which is still significantly better than the 5.3-litre gas-powered 2021 Yukon I drove earlier this year managed on the highway and empty.

The 3.0-litre with its 277 hp and 460 lb-ft of torque has more than enough power to move this hefty rig briskly, even with that loaded trailer on the back. More sound insulation and active noise cancellation means just enough diesel rattle to notice without sounds from underhood getting tiring on a long and loaded highway drive.

All Suburbans get automatic emergency braking with forward collision alert, front pedestrian braking, and rear parking sensors, with the latter extremely important for a vehicle like this that occupies two postal codes at once. Front park assist, lane change and lane-keeping, and rear cross-traffic are options on lower trims, standard on top-spec trucks, but Chevrolet is stingy on some of the best stuff. Adaptive cruise is Premier and High Country only and it’s an additional option on both. Same with trailer blind spot monitor. The helpful when loaded rear camera mirror and surround-view cameras are also only on top trims.

The interior is much improved over the pickup on which it is based, and Chevrolet has gotten rid of the Silverado’s screen that almost disappeared in a sea of black plastic on the dash. This screen is raised up and stands alone atop the heater and radio controls, and at 10.2-inches is larger and offers plenty of room to display wireless Android Auto and Apple CarPlay, the towing screens, or whatever else you’re looking at at the moment. The system responds quickly to inputs and is easy to configure to put all your usual icons on the main home screen. 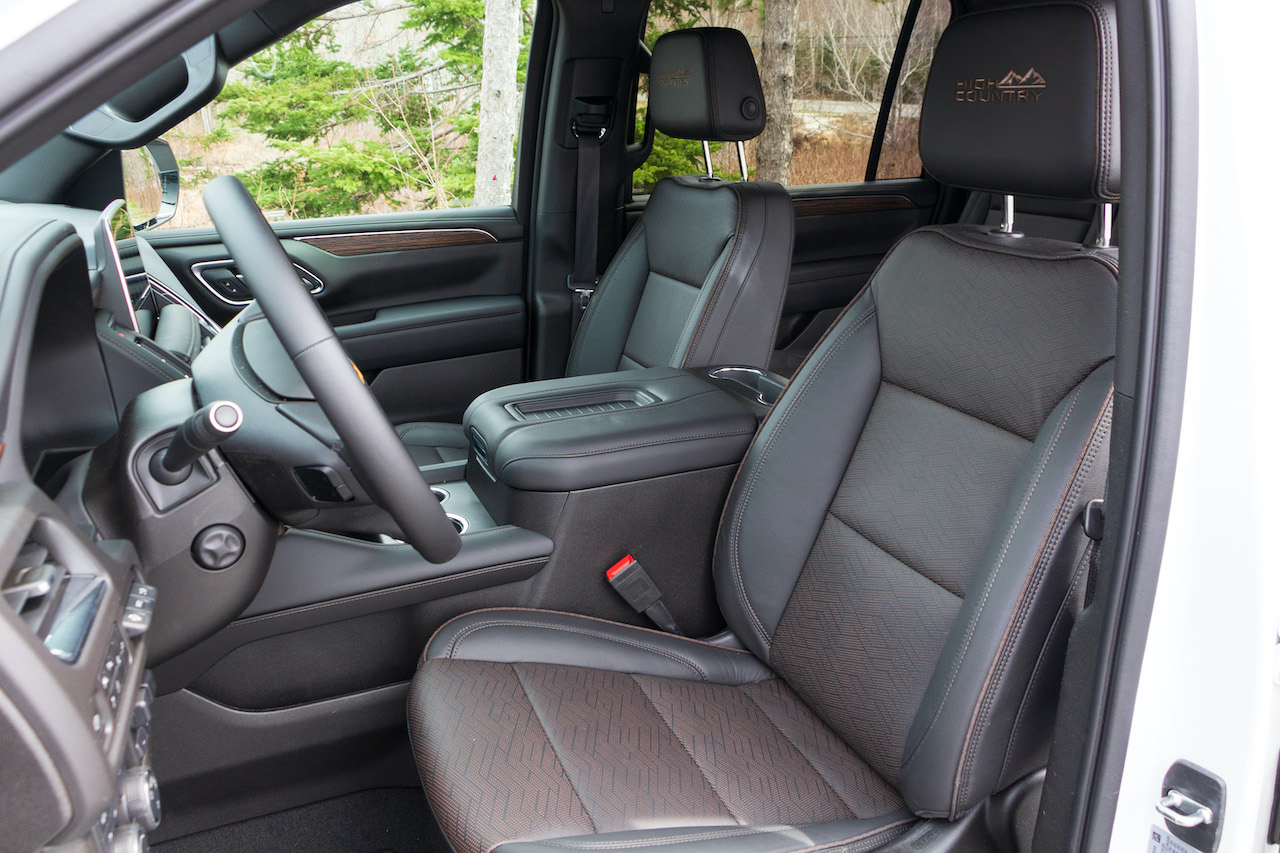 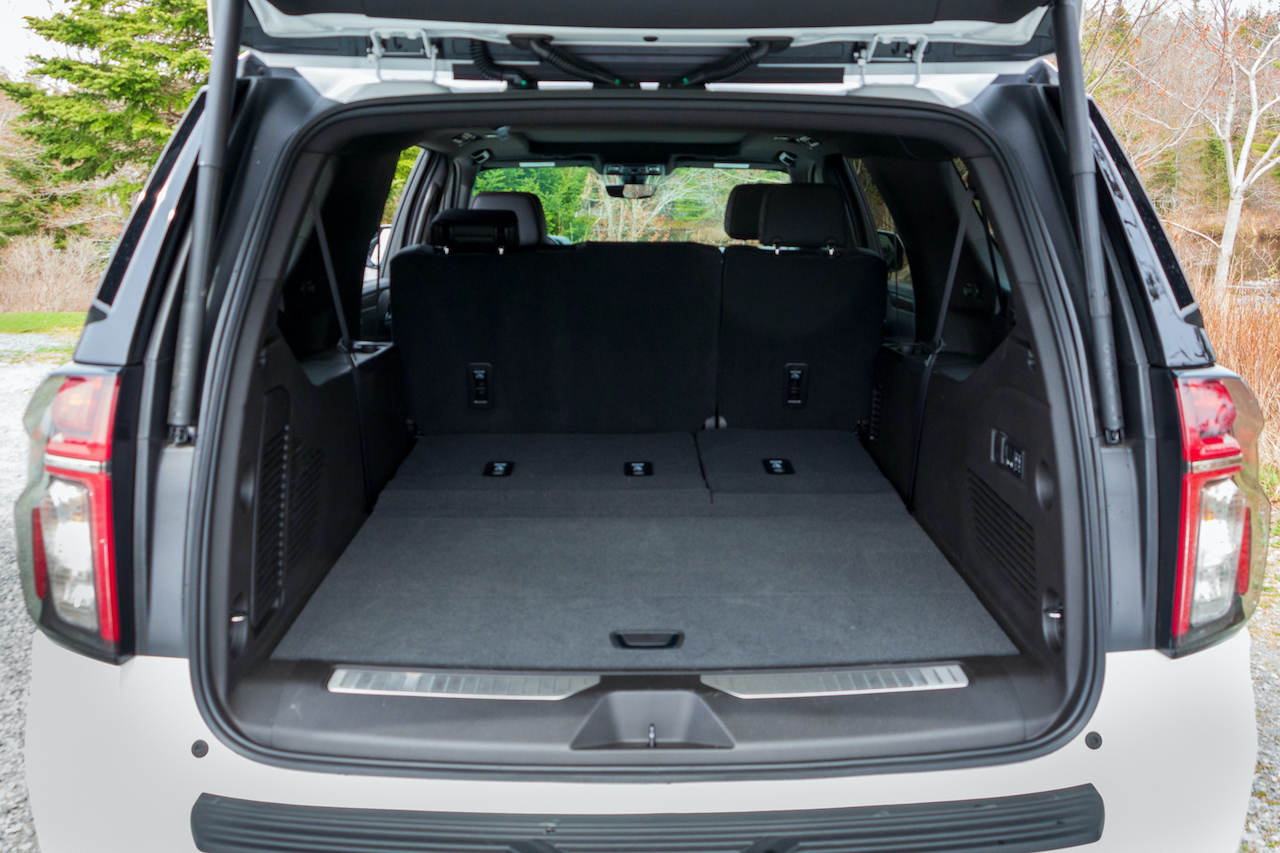 This High Country spec gets perforated leather seats with heating and ventilation, but while it’s likely durable, the leather doesn’t seem quite up to what you’d find in other crossovers at this price level. Though most of those luxury competitors don’t offer anything approaching the same capability. The dashboard buttons, while large and convenient, are also flimsy to the touch. It’s not confidence-inspiring when you press a button on your $90,000 SUV and the entire panel it’s attached to moves or rest your knee on the center console and a panel pops out of place, and it’s not an issue affecting just this particular unit.

Space in all three rows is adequate for XXL-sized adults, though the panoramic roof cuts into second-row headroom (the third row offers more). The key benefit of the Suburban over the Tahoe here isn’t so much the extra 1.8-inches of third seat knee-room, rather the much larger opening for getting in and out that the longer wheelbase allows. Even the third row has USB-C ports, and there are more places to put a drink bottle than there are chairs in the Suburban. Cargo space behind the third row is up 51 litres to a massive 1,164 litres and with all the seats dropped it’s up an incredible 651 litres to 4,106 litres. That’s a gain larger than most midsize sedan trunks hold altogether.

The Suburban is clearly a big deal to Chevrolet, and that goes beyond just in size, but this is the first time that a Suburban has been able to say it has ride and handling as good or better than similarly-priced crossovers while eclipsing them in capability. With the diesel, it slashes their fuel bills as well. Suddenly, the biggest vehicle of its kind is the one with the fewest compromises. As long as it will fit in your garage.

The vehicle was provided to the writer by the automaker. Content and vehicle evaluations were not subject to approval.